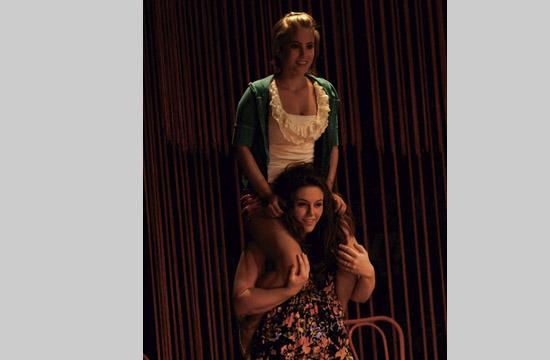 According to statistics, girls lose much of their initial self-confidence and initiative when they reach their teen years. But teen girls also tend to turn inwards and confide in diaries or keep blogs in which they write about their fears and hopes.

“Bloody Red Heart,” now playing at the Odyssey Theatre in West Los Angeles, is a play drawn from essays in the book “Red: Teenage Girls in America Write on What Fires Up Their Lives Today.” Editor Amy Goldwasser collected these essays by girls ages 13 through 19, from all over the country, from every ethnic and socioeconomic background. Eleven of these essays, and snippets from other essays, have been adapted by Goldwasser and Tom Bryant to create a program of dramatic monologues similar to the just-filmed “For Colored Girls.”

Director Leslie Ferreira stages the play simply – the eight young women who play the various roles sit on red-painted chairs or on the floor, use the chairs as props, stand, run, and dance as they tell their stories. The backdrop behind them, designed by Tesshi Nakagawa, resembles a huge blackboard on which are scrawled lines from the essays: “I am the victim of a happy childhood,” “I’m just sitting here, shouting at the top of my lungs in unintelligible whispers,” and over and over again, the litany that the girls hear from everyone: “Are you OK?”

The actors are students at the Theatre Academy of Los Angeles City College. Not much older than the authors of the monologues, they are dressed to look suitably young – short skirts, letter sweaters, sloppy casual shirts. All the nuances of teen behavior are here, some of them so perfectly played (girls jumping around and giggling as they try on clothes; girls gossiping on their cell phones) that audience members can’t help but laugh, or gasp, in recognition.

Some of the stories are equally universal for any gender or age group. Carey Dunne’s “Gym at Riverton,” performed by petite and energetic Melanie Rogina, sketches, with a liberal dose of humor, the teenage horror that is gym class. (Dunne’s description of herself in a bathing suit: “In ninth grade I looked like Gollum”). Amy Hunt’s “Sleeves,” performed by Noa Medford, might just be the last word on the suffering of overweight people. Medford depicts Amy in a science lab where she overhears two students (male) talking trash about her. One of them remarks: “She should kill herself – she’s so fat.”

Other stories have powerful messages to deliver. “TLC: Three Days” by Annie Littlewood, performed by Deborah Elizabeth Senior, is based on Littlewood’s experiences with foster care and a dysfunctional family. The harrowing “Lies We Have Told” by Sarah McIntosh, performed by Neva McIntosh with Rene Michelle Aranda as “the friend,” focuses on a friendship, with one girl fearing she has betrayed her friend because she cannot help her with her problems. These sequences are possibly scary; they are certainly dark and unsparing, told as they happened by the girls who lived the experiences.

“Bloody Red Heart” confronts stereotypes of what a “girl” is. The very title comes from Emma Considine’s essay on the pain of being the child of separated parents. These teen girls reject the image of “pretty in pink,” and tell their tales with profanity, vivid imagery, gross-outs, and frank confessions of feelings.

This play is slated for only a three-week run at the Odyssey but catch it if you can. And if you can’t, pick up “Red,” published by Plume (Penguin) Books.