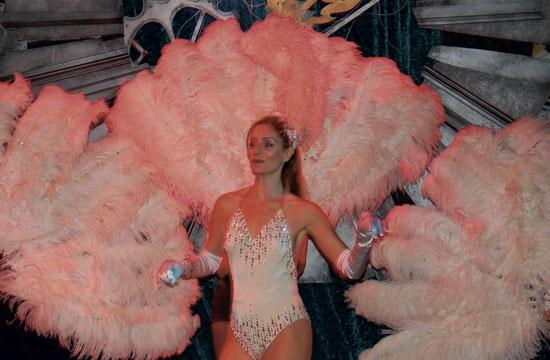 Santa Monica’s Edgemar Theater Group presented a cabaret-style show a couple of years ago called “The Night of the Black Cat.” Its success inspired a new cabaret show, “Le Tick Tock.” Created from familiar and original songs, directed by Deborah LaVine, the imaginary cabaret’s conceit is that it is a time-travel experience—the performers represent different time periods and there is no regular chronology.

Tracey Sayed, the Timekeeper, is our emcee, assisted by the comical Chi Chi Navarro. In an opening number, we meet a collection of chorines in black corsets, bustiers, and fishnets who promise us an evening of entertainment evoking the cabarets of the past (but with more than just cabaret—type music). The lineup also includes two men, the Buddy Hollyesque bespectacled Joe LeMark (John Bobek) and the flamboyant Z.Z. Lee (Kenny Lee).

The resulting show is a somewhat uneven mix. Having different genres of music in cabaret format is a fine idea but in execution, a few of the songs don’t feel or sound right. Joe LeMark is the main character in the spoke-word framework sequences, a 1950s rocker waiting for his ideal woman. His rendition of a period rock song “Never Let Me Go,” played with a woefully tiny and tinny amp, and with screaming fans, might have been meant to be funny but did not seem that funny to the audience. Bobek as LeMark does better with a song called “Bartender,” but the thought intrudes that for this down-and-out character, the perfect persona and the perfect musical material would have been those of Tom Waits.

Other performers and their acts have more impact and are more fun. Jennifer Capriccio does some wonderful leggy dancing as “La Paloma,” a Cuban showgirl, while Tamara Arias, just barely covered with glitter, writhes and revolves as “The Creature,” accompanied by an all-percussion instrumental. Lena Coleman as “Lady Lena Josephina” evokes her namesakes Lena Horne and Josephine Baker with sensual renditions of a French number and “Blues in the Night.” Kenny Lee is very funny and sexy in “Rocky Horror Show” style as he performs “More Than a Man” in semi-drag and also sings a serious self-penned song about tolerance, “Don’t Look Away.”

Emcee/Timekeeper Sayed even belts out a number, giving strength to the song from “Oliver,” “Food, Glorious Food.” The Assistant, Chi Chi Navarro, also gets laughs with her Rusty Warren-style bawdy solo “Bang Your Way to the Top.”

Jake Cheyne, the musical director, provides brisk and appropriate piano accompaniment, while a few songs are accompanied by percussion, guitar, and prerecorded electronics. The stage set by Joel Daavid, with several circular platforms, works well for the active performers. A few tables in front of the seats for those lucky enough to arrive early, give the theatre a cabaret feeling. And thanks to LeVine’s pacing, the show moves fast, maybe too fast for those who are expecting a lengthy evening for their money.

“Le Tick Tock” is not really a play but it may not pass for really great cabaret either. It is, however, fine as light entertainment, suitable for the holiday season and will run until January 22.