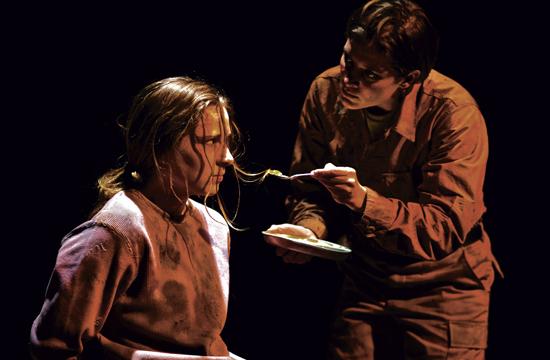 Kit Steinkellner’s new play puts war center stage. The Los Angeles Theatre Ensemble, in residence at the Powerhouse Theatre in Santa Monica, is on a roll with new works and this play, “The Good Prisoner,” is definitely part of the company’s hot streak.

The story is that of a female prison guard who can’t leave her post when the regime she is supporting clears out of town. Anna (Paige Lindsey White) is known for her brutal acts of violence and her relentless ability to get prisoners talking, even if it means inflicting serious pain. But now that the war in this seemingly small American town has ended, Anna is reduced to a simpering loner, a broken woman who sleeps at the prison camp and talks to ghosts. White is a pro at vacillating between the warrior without a conscience and the helpless victim of circumstance.

While Anna gnashes her teeth and climbs the prison camp’s walls, Anna’s sister (Sarah Kay Watson) is trying to find all the missing townspeople that have disappeared since the regime left town. Have they been killed? Have they been kidnapped? Just what is going on in the wake of this awful occupation?

It’s a war story, a family drama, and a psychological thriller all rolled into one outstanding play. Director Louise Hung doesn’t miss a beat, guiding the strong cast through violent, depressing, dark terrain with an exceedingly sure directorial hand.

Several of Anna’s dead haunt the play throughout, and their stories all share one similar thread, a connection to Anna that is bone-chilling.

It’s a pleasure to see such serious subject matter handled with respect and integrity by this bold company.