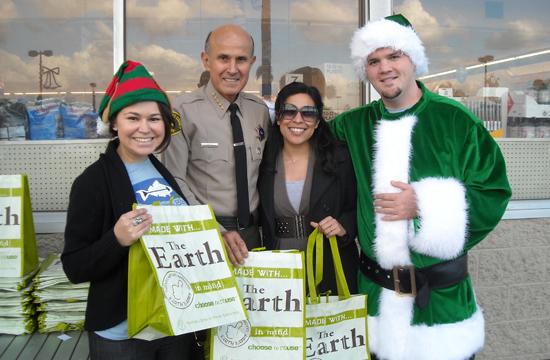 Thousands of reusable bags were distributed throughout Los Angeles County on Dec. 16 in order to encourage shoppers to give up using disposable plastic bags.

The fourth annual “A Day Without A Bag” was coordinated by Santa Monica based Heal The Bay (HTB) and supported by a broad coalition of retailers, local governments, and community groups across the county.

Meredith McCarthy from HTB told the Mirror this year the day “tried to zero in on communities that are not as conscious” about using recyclable bags as well as low-income communities.

This year’s event follows the ban of single use plastic bags in the unincorporated parts of the county approved by the Los Angeles County Board of Supervisors on November 16. The county action came after the State legislature failed to pass a statewide ban last August and opened the door for the county’s 88 municipalities to pass their own bans.

In February 2008 the Santa Monica’s City Council delayed their vote on a draft ordinance that would of banned the use of single use plastic bags in the City and placed a fee on the use of paper bags at retail stores. The vote was delayed on the advice of the City Attorney because the Save The Plastic Bag Coalition threatened to sue the City because they didn’t due a thorough enough environmental review before the drafting the ordinance.

A Master Environmental Assessment (MEA) was then done with other California counties and cities. The MEA was completed in March of this year but the city kept postponing its reconsideration of its ordinance. Now, the city’s original ordinance would be illegal due to the passage of Proposition 26. This proposition requires that certain state and local fees be approved by a two-thirds vote. The city’s ordinance included a 20-cent fee for paper bags and 3 ½ cents of that fee would of gone to the city.

On January 25 the Council will consider certifying the Final Environmental Impact Report for the ban and approving the first reading of an updated ordinance that complies with Proposition 26.

The Mirror also spoke with Josephine Miller an environmental analyst with the city’s office of sustainability and environment. She stated that if the Council approves the ban there “will be quite an aggressive outreach campaign” throughout the city. “The community is ready to take on the responsibility of using reusable bags. Many people are already using them and many businesses are giving them out.”

Miller also pointed out that the city has been giving out reusable bags that are made from scrap military material by veterans in West Los Angeles. This is an example of how reusable bags can help “create green jobs in our community.”

A 2008 Santa Monica City staff report stated that a ban is being sought because plastic bags are a significant part of litter in the environment. It also noted that plastic bags could easily be carried by wind and water. Therefore, they are large contributors to the free-floating plastic debris in marine environments because they do not biodegrade. Marine animals frequently mistake plastic bag pieces for food or become tangled up in plastic bags.

According to a HTB December 8 press release Los Angles County residents use about 6 billion single use bags a year and county spends over $18 million annually to collect and dispose of plastic bag waste.