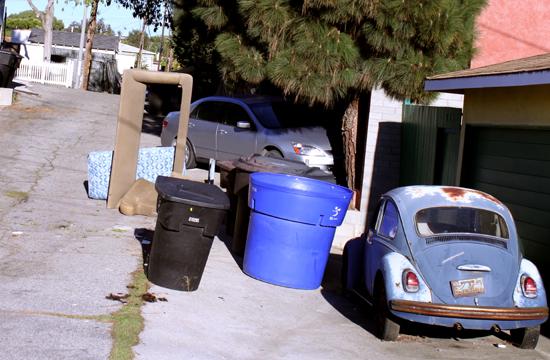 Residents have found large items such as couches or desks that have been illegally dumped in alleys throughout Santa Monica for years, but some residents in Sunset Park have complained to the city that the problem has escalated.

The problem has become so severe that 75 percent of customer requests to the City’s Resource Recovery and Recycling (RRR) division are for removal of these illegally dumped items in alleys, said Kim Braun, the division’s manager.

Currently, the City has a policy where residents must call the RRR department to request that they pick up large items that don’t fit into the City’s standard residential trash bins. Residents must also pay a fee of at least $25 for this special pickup. Many residents either don’t know about this service or are unwilling to pay the required fee. If the City responds to a customer complaint about an item being dumped in their alley, the person who made the complaint doesn’t have to pay a fee.

Braun explained that the City is trying to deal with the problem through a pilot program that has already begun. Three days per week, a truck with a two-man crew goes through the alleys in a section of the city collecting the items that have been dumped. They use a special truck called a rear loader, which is capable of grinding up these big items.

The City is hopeful that during the next budget cycle for the 2011-2012 fiscal year a similar expanded program can be funded. If implemented, this program would operate Mondays through Saturdays and be manned by four two-person crews. The City would be divided into four quadrants and each quadrant would have its own crew.

Braun also mentioned that if the full-time program is funded the fees to pick up the large items would be abolished. The fees would then come from the trash utility fees that are part of property owners’ water bills.

Another program the City has started is the rental of temporary bins that are from 2 to 4 cubic feet for a fee of $125. The fee includes the delivery of the bin and the first dump of the bin. Additional dumps cost $50. These bins are good for people who are cleaning out their garage, remodeling, redecorating, or who have a lot of yard waste.