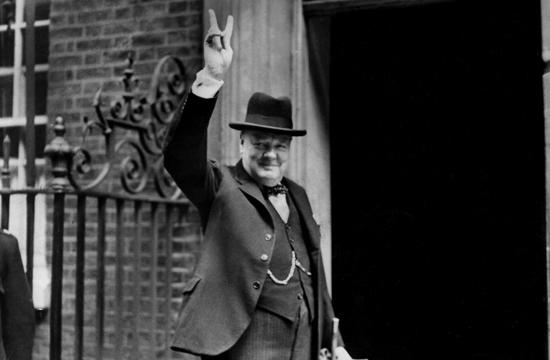 Winston Churchill is one of those historic figures whose name few are unfamiliar with. His quotes have graced this publication on more than several occasions. But as the generations that remember his life and importance get older, many in the subsequent generations have an increasingly vague and removed understanding of why everyone knows this man who had such an influential impact on world history.

For those who fall in to the latter category, the documentary “Winston Churchill: Walking With Destiny” is a must-watch. It is the newest production of the Simon Wiesenthal Center’s two-time Academy Award-winning Moriah Films. The film was recently screened at the Santa Monica Laemmle Monica 4-Plex.

The film recounts Churchill’s early years as prime minister, after coming from the political wilderness. As historian John Lukacs explains in the film, Churchill did not win the war in 1940; the war was won once the Americans and the Soviets entered the battle in 1941. But Lukacs points out that in 1940, the war could have been lost if it was not for Churchill. The documentary focuses on this tense period when Britian was under attack from the Nazis as the last-standing European force against the Nazis prior to the U.S. and Soviet entrance into World War II.

The documentary starts by chronicling Churchill’s funerary festivities, which shows the audience just how revered this man was in Britain. This opening sequence is the first of many contextual presentations that help to not only tell who Churchill was and what he did, but what happened in the wider scope that made his choices so vitally important. Providing context is one of this documentary’s strong points.

Additionally, many of us, whether we know it or not, are familiar with Churchill’s famous quotes. However, many of us are not familiar with the context in which those quotes were uttered. When understood fully, the things this man said carry even more powerful weight.

For instance, you may have heard the quote, “Never have so many owed so much to so few,” used to describe World War II, but the quote has a much more specific significance. Churchill said this after visiting Royal Air Force pilots who, while living in a constant state of readiness and who sometimes flew six missions a day, repelled the numerically superior Nazi fighters sent to attack Britain. The bravery and heroism of these pilots overwhelmed Churchill, who attributed Britain’s survival to these few men.

At a minimum, prior to viewing this documentary most people will know that Churchill made the policy decisions and political moves necessary to ensure Britain’s survival. But another strength of this film is the portrayal of Churchill as more than just a political leader, but also as a leader of Britain’s spirit. Despite more than a year of nightly bombing raids, despite the impending numerically superior Nazi war machine, and watching cities like Paris fall, Churchill never faltered and he persevered. The film illustrates the subtle ways in which he performed this duty, such as walking the streets after bombing raids, mingling with the people.

In the opening segment, the film jumps back to May 10, 1940, when Neville Chamberlain resigned as prime minister following widespread public dissatisfaction with his leadership. Following his appointment to replace Chamberlain, Churchill met with King George IV, after which he was described as uncharacteristically quiet and introspective.

“As I went to bed… I was conscious of a profound sense of relief. At last I had the authority to give directions over the whole scene. I felt as if I were walking with destiny, and that all my past life had been but a preparation of this hour and for this trial… I thought I knew a good deal about it all, and I was sure I should not fail.”

The phrase, “I felt as if I were walking with destiny,” not only is what the film draws its title from, but it also is an example of theme that runs throughout the documentary: Chruchill’s more-than natural role as leader during the dark times. On several occasions, the documentary highlights quotes and instances that paint Churchill as some sort of supernatural being, bestowed by fate and protected by a higher power, to repel the forces evil.

Churchill is also portrayed as a solemn visionary, whose prophetic foresight of the impending doom might have helped diminish the Nazis’ conquest if only the other world leaders had heeded his warnings. Sir Martin Filber, the film’s historical consultant, points out that had Churchill’s warnings about Nazi Germany’s racial policies toward Jews been heeded in the early 1930s, the Holocaust might never have occurred.

Too often Churchill is viewed in context of his role after the U.S. entered the war. The film’s focus on the time before the U.S. and Soviets entrance in the war is portrayed in a surprisingly suspenseful manner, which keeps the audience enthralled down to the last moments of the film.

“Winston Churchill: Walking With Destiny,” will be screened at international film festivals, broadcast on television worldwide, and distributed on DVD and other media.