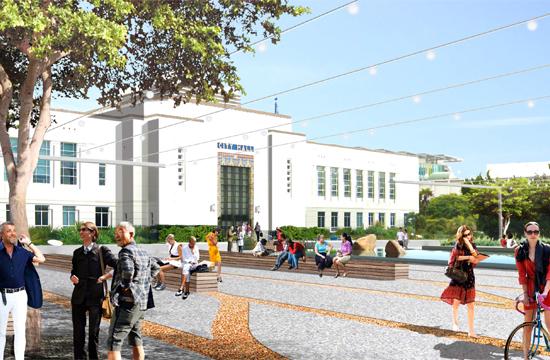 One of those parks will be the six-acre Palisades Garden Walk Park, which is located directly across from City Hall and bounded by Main Street, Ocean Avenue, the I-10 freeway, and the extension of Olympic Drive. This is the former RAND site. The other one-acre Town Square Park will be located directly in front of City Hall from the City Hall’s steps down to Main Street.

Members of the community who spoke expressed a strong interest in having a subterranean parking garage placed under the park. Jeff Klocke, the director of marketing for the Santa Monica Pier’s Pacific Park, said, “parking in this site would be ideal not just for the Pier, the new Santa Monica Place mall, and of course City Hall.” However, “subterranean parking [is] not an option because it would limit the features above ground. We’ve since learned that there are many examples across the country and even in Los Angeles where that is simply not the case.”

City Manager Rod Gould responded, “While it is unquestionably very desirable to have parking at this location” and its possible to engineer parking under the park, he pointed out that the city’s current parking plan already assumes the allocation of every dollar foreseen for the coming years.

“In order to commit to this you would have to sacrifice other redevelopment projects that are already on your list and under-funded,” Gould said. “It’s a matter of choices” and would slow down this project by two years.

After council approval, the schematic design scheme will now be used to create design development documents for the project.