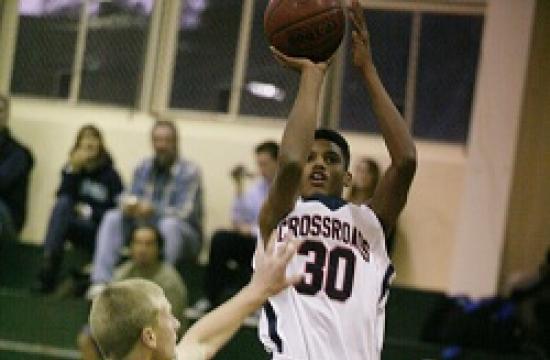 Crossroads boys basketball team remains an undefeated 4-0 on the season after escaping with a 61-60 win over host St. Monica on Thursday night at the St. Monica Tip-Off Invitational. The Roadrunners managed to withstand a Mariner rally that came up just short with two-tenths of a second left on the clock.

The win gave Crossroads the tournament championship and bragging rights for beating the crosstown rival, but it wasn’t an easy win by any means, as the Mariners came back from being down by as many as 15 points, with Crossroads taking a 34-20 edge into halftime.

“It was a great comeback,” said St. Monica’s first-year head coach Khi-Min Jung, the loss being his first. “They showed a lot of heart. They never gave up … [I] always take responsibility for the losses.”

Crossroads was paced by Kenyon (Ohio) College-bound senior point guard Luke Shmuger, who had 22 points. Power forward Gysi Williams had 10 points, mostly in the first half, as he had a muscle pull in the second and came out of the game for head coach Kevin Jackson.