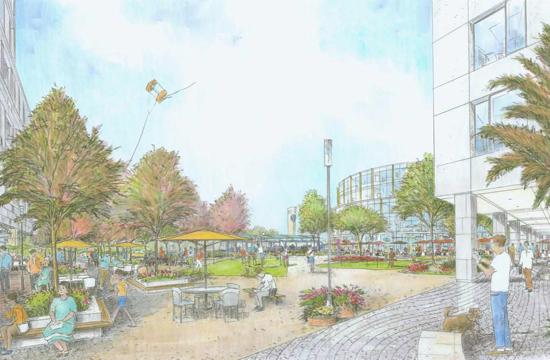 Hines 26th Street, LLC is proposing to build a transit-oriented, mixed-used village they are calling Bergamot Transit Village Center Project at 1681 26th Street (the former Paper Mate site). The Draft Environmental Impact (DEIR) process for this project began on Dec. 8 with a City of Santa Monica scoping meeting held to determine what issues should be analyzed in the DEIR.

The proposed project would consist of five buildings with an average height of six stories that would be built on a 7.1-acre site located across the street from the future Expo Light-Rail Bergamot station. Some of the site’s buildings would contain creative uses and the others would be residential. Project access would be from Olympic Boulevard, 26th and Stewart streets. A three-level subterranean parking garage would contain approximately 1,961 parking spaces. Also included would be public and private open spaces consisting of two parks, walkable plazas, a playground, and passive and landscaped areas.

Hines is seeking to enter a Development Agreement (DA) with the City of Santa Monica in order to build this project. A DA is agreed to by Santa Monica and a developer when the developer offers the City public benefits in exchange for permission to develop their project with parameters (such as height) that are outside of the of the City’s zoning standards.

During the public input part of the meeting, Pico neighborhood resident Linas Baskauskas stressed what many of the speakers were interested in: The “DEIR should not isolate this project.” Instead, it should take into consideration the cumulative effect of all the projects being proposed on the eastern end of the city, he said. He also wanted the DEIR to look at “where the water would be coming from for the project.”

Mid-City resident Linda Lancaster wants the DEIR to study “the number of car trips generated by the 1,961 project parking spaces” and look at “the traffic the project would generate outside the rush hour period.”

Ryan Tucker had a different view. To him the proposed project did not have sufficient parking, so it would spill over into the surrounding neighborhoods. Therefore, he wanted the DEIR to look at whether the project contained enough parking.

Sunset Park resident Laura Dixon said one of the intersections near the proposed project “already had an F rating” for traffic flow, so she thinks the DEIR needs to emphasize traffic studies at all intersections potentially impacted by this project.

The City’s Special Projects Manager, Jing Yeo, stated that the DEIR is projected to be completed and available for public comment for a 45-day period in the summer of 2011. After the public comment period the final EIR will be prepared, published, and presented to the City’s Planning Commission and City Council for certification.

Those who did not attend the meeting but who want to submit comments on DEIR issues can do so until December 15 by contacting Jing Yeo, AICP, Special Projects Manager, Planning and Community Development, 1685 Main Street, Santa Monica, CA 90401, fax: 310.458.3380, e-mail: jing.yeo@smgov.net.