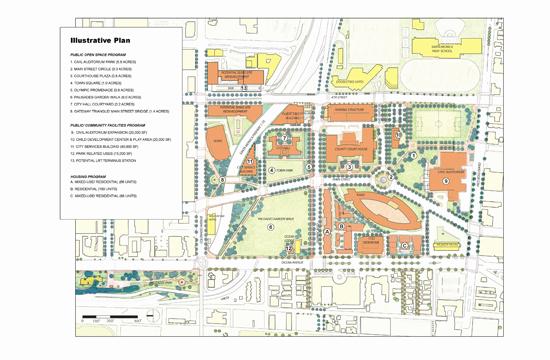 The Main Street Circle was included in the Santa Monica’s 2005 Civic Center Specific Plan to mark the change in direction of Main Street with a landscaped feature. Now, if the City Council agrees with the Planning Commission’s recommendation, the circle will be taken out of the plan.

In their report, planning staff states, “The intent of the Circle was to create a stronger sense of arrival, to ‘calm’ vehicular movement and to reinforce the north-south axial relationship between the Town Square and the Civic Auditorium.”

In March 2009, the Council discussed the Main Street Circle during a study session which considered an integrated approach for CCSP planning and the implementation of Civic Center and Expo Light Rail improvements. During the discussion they decided that by eliminating the Circle there would be greater flexibility for future development at the Civic Center Auditorium site. Additionally, the planning staff report noted, “in the March 2009 study session, Council concluded that the Main Street Circle was no longer aligned with the broader priorities for the Civic Center due to its location in relation to the proposed overall circulation improvements in the Civic Center.” In July 2010, the Council requested that the Planning Commission start the process to remove the circle from the CCSP.

The formal removal process will include the approval by the Council of an addendum to CCSP’s 2005 Final EIR.

The CCSP plan area is approximately 67 acres of downtown Santa Monica which is bounded by Fourth Street to the east, Ocean Avenue to the west, and Pico Boulevard to the south and Colorado Avenue to the north. Main Street bisects the Plan Area in a north to south direction.

Parts of the CCSP that already been built include the Public Safety Facility, the Civic Center Parking Garage, and the RAND Headquarters. The community process for the two parks that are part of the plan is still going on. The CCSP’s multi-family Village project is hold due to the economic downturn. Work on the expansion of the Civic Center Civic Auditorium and the early childhood center has not begun.