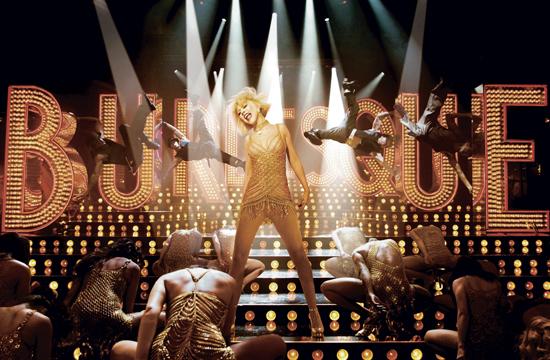 What could be better than an old school diva heating up the big screen with sassy songs, slinky outfits, and a take-no-crap attitude toward naysayers? How about an old school diva with a protege determined to shake her inexperienced money maker on stage?

This is the scenario in “Burlesque,” the new glitzy, slightly sleazy film from Sony that puts risque entertainment center stage. Cher and Christina Aguilera are perfectly paired in this popcorn flick, two big-voiced singers who know how to carry a film by simply carrying a tune.

Ali (Christina Aguilera) is an innocent, small town girl who wants to make it big in Los Angeles. She knows how to sing and dance, but she’s never seen anything like the moves she witnesses at The Burlesque Lounge. Wanting to kick, shimmy, and sashay with the sexiest of them, Ali gets a job as a waitress in the club, hoping eventually to make her way on stage. Club owner, Tess (Cher) isn’t easily impressed. Though Ali whines and begs, Tess is unmoved and unwilling to give her a shot in the film’s early scenes. But when the lead dancer in Tess’s show has one too many cocktails right before the curtain, Tess hesitatingly grants Ali her wish. Needless to say, our small town girl is a huge hit on stage and things only go up from that first moment in the spotlight. When Ali make, a split decision to sing instead of lip synch, like the other girls do, she instantly becomes the most popular performer in the joint.

It’s an absolute blast to watch Cher hem and haw as her character’s beleaguered club almost gets taken over by big developers. A pissed off old broad who refuses to back down, Tess is both gorgeous and frightening, a perfectly quaffed ball of fire. Particularly fun are the scenes featuring Cher and Stanley Tucci, who plays Tess’s faithful stage manager. Tucci is as effective a side-kick to Cher as he was to Meryl Streep in “The Devil Wears Prada.” And when Tess gives Ali a cosmetics lesson, it feels like we are being let in on a legendary secret: Cher’s makeup tips.

The story gets a little predictable when the dancing dies down, and the last half hour drags under the weight of a tedious plot. While Tess is doing all she can to save the club from financial ruin, Ali and her new boyfriend, Jack (Cam Gigandet) come close to hitting the rocks. But we don’t really care about the fate of the club or the state of Ali’s love life, we just want to hear the music and see the dancing. For the most part, the film knows exactly what audiences want and delivers it with a wink, a smile, and a whole lot more. Alan Cumming makes a fun appearance in a minor role.