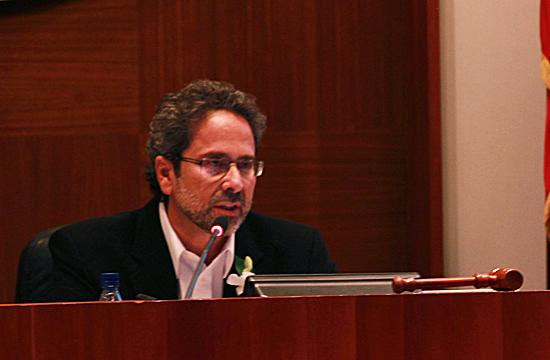 Richard Bloom was chosen by his fellow Santa Monica City Council members to be the City’s next mayor for a two-year term on Tuesday, Dec. 7 at City Hall.

He told the Mirror Sunday that he will be “running for the State Assembly in 2012 and after the first of the year he will be more active and public about running.” However, Bloom said running for State Assembly is not “my reason for accepting the responsibilities of the job of mayor. But it won’t hurt.”

Bloom plans to run for the State Assembly seat currently occupied by Assembly member Julia Brownley who is also from Santa Monica. She was just elected to a third term and cannot run again in 2012 due to term limits.

Council member Kevin McKeown had also expressed an interest in becoming mayor. “I want to offer Santa Monicans leadership on resident-protective zoning code and traffic control based on the best parts of the recently adopted Land Use and Circulation Element,” said McKeown in an e-mail to the Mirror prior to the vote, “and I’m committed to helping achieve community consensus on dealing with airport issues and preparing for possible changes in 2015.”

When the votes were tallied, Bloom was chosen by a 4-to-3 vote over McKeown to be mayor. McKeown was nominated by Council member Gleam Davis and also supported by outgoing Mayor Bobby Shriver. Shriver began serving as mayor following the death of Mayor Ken Genser nearly a year ago.

McKeown has been on the Council since 1998 but has never served as mayor despite being the Council’s top vote-getter for the second time in a row after this past November’s election.

Prior to the vote, two speakers expressed support for McKeown to be chosen as mayor. The Chair of the Wilshire/Montana Neighborhood Coalition, Valarie Griffin, told the Council, “The Wilmont Board has previously stated that we believe the role of mayor should be open to all members of our City Council. Mr. McKeown is well known to residents because he is directly involved in things that concern us. Mr. McKeown has not yet served as our mayor. We believe it is time for that to change. The Wilmont Board enthusiastically endorses Kevin McKeown for mayor of Santa Monica.”

The City of Santa Monica is not divided into districts so all seven City Council members are elected as at-large representatives. City residents also do not directly elect the mayor, which is mainly a ceremonial position but does act as chair of the Council and holds the power of agenda setting. Instead, he/she is a Council member elected by his/her colleagues to serve either a one-or two-year term. The same process is used to select the Mayor Pro Tempore.

Shriver commented after the votes by referring to those who spoke in favor of McKeown for Mayor by stating, “maybe, someday we’ll think about amending the charter, perhaps … so that the Mayor could be elected, therefore, part of the power and honor that accrues to the person that holds title would be chosen by the people.”

Since 2004, Bloom has served as a member of the Westside Cities Council of Governments (www.westsidecities.org), a regional policy agency consisting of Santa Monica, West Hollywood, Beverly Hills, Culver City, and the City and County of Los Angeles. In 2006 he was elected the organization’s first chair. The agency coordinates policy and advocacy on issues of regional significance, particularly homelessness and public transportation.

Born in Philadelphia, Bloom grew up in Altadena and West Los Angeles. He attended Fairfax High School, the University of California (Los Angeles and Berkeley) and Loyola School of Law. He holds a B.A. in Communication and Public Policy as well as a Juris Doctor degree.

Bloom is an attorney with nearly 30 years of experience providing family law (marital dissolution, child custody, support, etc.) services to a diverse client base including a stint as executive director of the Levitt and Quinn Family Law Center, a nonprofit law firm serving low-income clients. He recently expanded his practice to include consulting on community issues and civic engagement.

Bloom has served as a volunteer judge pro tem, and mediator for the Los Angeles Superior Courts and on the executive committee of the Los Angeles County Bar Association Family Law Section.

Bloom is married to Robbie Black, an occupational therapist at Cedars-Sinai Medical Center in Los Angeles. Robbie and Richard have two children, Zac and Emmett. Both were educated in the Santa Monica-Malibu Unified School District. Zac (20) is a junior at Colby College in Maine and Emmett (19) is a freshman at the University of California, Santa Barbara.

The Council also voted for Council member Gleam Davis to serve for a two-year term as mayor pro tem, after two rounds of voting. Davis joined the City Council in February 2009 when the Council selected her to fill the seat left vacant by the passing of Herb Katz and was elected to an additional two-year term in November 2010. At the time of her appointment, Davis was a member of the Santa Monica Planning Commission and co-chair of Santa Monicans for Renters’ Rights. She has been active in the community since she moved to Santa Monica in 1986. She began her public service as a member of the board of directors of WISE Senior Services. Since then, she has chaired numerous organizations including the Santa Monica Child Care and Early Education Task Force and the Santa Monica-Malibu Unified School District’s Facilities Bond Advisory Committee.

Davis is corporate counsel for AT&T and supervises all of its litigation in the Los Angeles area. She is chair of the AT&T Legal Department’s West Region Pro Bono Committee and actively works with KIND (Kids in Need of Defense) which represents unaccompanied minors in immigration courts. Before joining AT&T, Davis prosecuted civil rights violations as a trial attorney in the Civil Rights Division in the United States Department of Justice and was a partner at the law firm of Mitchell, Silberberg and Knupp. She graduated from Harvard Law School in 1981 and from USC in 1978. She was born in Los Angeles and grew up in San Gabriel and Arcadia. Davis and her husband, John Prindle, have one son, Jackson.