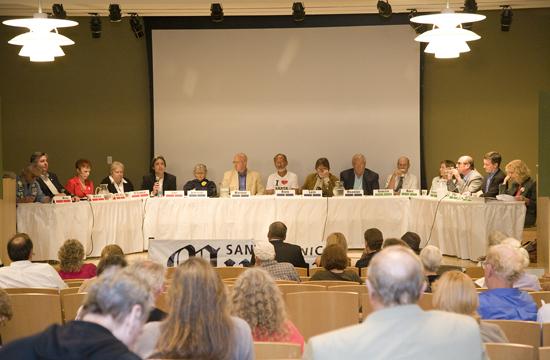 Jay Johnson, who has served on both the Santa Monica Planning Commission and the Rent Control Board, wrote to unsuccessful Council candidate Jerry Rubin and blamed Rubin’s candidacy for the defeat of SMRR-endorsed Winterer, suggesting that Rubin “immediately resign from SMRR” as the “honorable thing to do.”

“I am not challenging your right or desire to run for council,” wrote Johnson, “go right ahead – just don’t be a member and then betray the organization.”

In the Nov. 2 election, the three open four-year Council seats went to the three incumbents: SMRR-endorsed Kevin McKeown (21.77 percent of the votes), SMRR-supported Pam O’Connor (19.37 percent), and non-SMRR Holbrook (17.03 percent). SMRR-endorsed Winterer finished fourth with 16.95 percent (less then 1 percent behind Holbrook), ¬and Rubin finished sixth with 4.97 percent; Rubin is a SMRR member who did not have endorsement or support from the organization.

Rubin, who describes himself as “a member and supporter [of SMRR] since they first started,” said he found Johnson’s suggestion “surprising.”

“I really don’t want to resign,” he added. Many others agree with Rubin.

“I told Jerry, ‘Don’t you dare resign,’” Zane said. He acknowledged that Rubin’s candidacy “could have changed the outcome” of the election, but said that that was not a fair basis for urging someone’s resignation from SMRR.

Richard Tahvildaran-Jesswein, who co-chairs SMRR, emailed Rubin that “Jay Johnson does not at all speak for the steering committee of SMRR” and called Rubin “a valued member of our association.” Former mayor Judy Abdo wrote, “Jerry, do not resign from SMRR.” Rubin received support from SMRR Council members O’Connor (“renew you SMRR membership when it’s due”), Gleam Davis (“I think you should stay in SMRR”), and Terry O’Day (“I do not agree with [Johnson’s suggestion] at all”).

Holbrook wrote Rubin, “This would be like me accusing Jean McNeil-Wyner [who finished fifth with 5.35 percent] of making me nearly lose the election because she ran and took votes away from me!! . . . You are a free man and can do whatever you choose. I am shocked Jay would lay this on you.”

Though Rubin and Winterer are both SMRR members and Holbrook is not, it is not completely clear that Rubin drew more votes from Winterer than he did from Holbrook. During the campaign, Rubin endorsed Holbrook’s candidacy but not Winterer’s, largely because Rubin agreed with Holbrook’s opposition to the 2008 Residents’ Initiative to Fight Traffic (RIFT), which Winterer co-drafted (SMRR took no official position on RIFT.)

But Johnson’s accusation that Rubin had betrayed SMRR by himself running in the officially nonpartisan City Council election leaves some troubled by such a lock-step standard of “loyalty.”

Council member O’Day emailed Rubin that his candidacy “promoted your core values and ethos into the campaign debates and interactions in our community. There is no question that your cool-headed commitment to our community and to progressive values stands as a check on all purported leaders in this community – Jay Johnson included.”