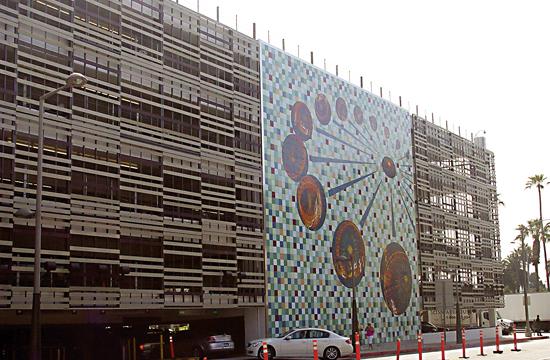 Back in 2002, Santa Monica’s City Council conceptually approved the Downtown Parking Task Force’s recommended strategic plan to retrofit, rebuild, and add parking resources in the Downtown area over a ten-year period. The plan’s implementation was not approved until 2006.

The strategy, according to the City’s planning staff’s Feb. 28, 2006 report, is based upon “the ‘Park Once-Pedestrian First’ orientation to encourage visitors to drive as little as possible. It was developed based on the premise that the existing [six] structures are in the ideal location, so that the City should maximize the potential of these structures, while additional resources should be located within easy access to the core of downtown to expand the vitality of the core area.” The plan recommended retrofitting the three tall structures (Structures 2, 4, and 5) and demolishing and expanding the short structures when they are rebuilt (Structures 1, 3, and 6). Also recommended was adding two new parking structures within a walkable distance to the Downtown core.

In November of 2009, the City Council recommended that the plans to rebuild Parking Structure Number 6 located at 1431 Second Street should go forward. On Dec. 1, 2010 the Planning Commission reviewed and made recommendations on the conceptual plans for that structure. The conceptual plan would replace the 345-space structure with a new 714-space structure that has 3 1/2 subterranean levels and eight above-grounds parking levels. Also included will be bike racks, motorcycle parking areas, and retail space that would front on Second Street. The commission’s input will now be taken into account by the parking structure design team and the project will come back to the commission for a formal hearing early next year. The City would like to begin construction in early 2012.

Plans to rebuild Parking Structure Number 1 located at 1234 Fourth Street have been delayed because financing has not been secured.

In July 2010 the planning commission approved demolishing Parking Structure Number 3 located at 1320 Fourth Street and replacing it with a new AMC theater complex. This contradicts the Downtown Parking Task Force’s recommendation which was to rebuild and expand this structure with 324 downtown parking spaces, which will be lost.