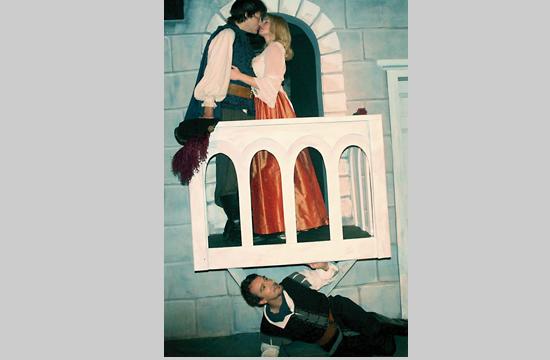 The Ruskin Group Theatre’s production of “Cyrano de Bergerac” is an act of faith and courage worthy of the play’s title character. In this modern age, an 1897 verse play about romance in 17th century France isn’t the easiest theatrical work to mount. It’s harder still when it’s done by a small theatre with a literal small playing area. With this production, producer Michael Myers and director Rae Allen have accomplished more than one would hope for, considering the space limitations and an ensemble of 15 actors and two alternates.

Allen, a veteran of stage, screen, and TV who is still working at age 84, has staged Edmond Rostand’s play in a space about as big as a living room. One set serves all five acts, with a bench, a stool, and a balcony in the wall as the main furniture. The minimal amount of floor space required careful blocking and choreography of swordfight scenes and Allen’s staging passes these tests.

For those unfamiliar with the play, the first act might seem confusing-it’s set in a Paris theatre in 1640 and therefore has a “play within a play” as a component. If the actors and direction can’t quite make the first act smooth enough, it isn’t really their fault. Once we get past Rostand’s conceit of bringing all the characters on stage at once to introduce them, the action begins for real in Act Two.

If you don’t remember the story (which has sparked numerous film and TV adaptations, from a Japanese samurai version to the modern-day film “Roxanne”), it is about a real personage, Savinen Cyrano de Bergerac, a soldier, poet, playwright, duelist, and wit, who loves his cousin Roxanne but bears no hope that he can win her due to his overly large nose. His fellow soldier Christian wants Roxanne’s love but although he is good-looking, he lacks eloquence. The two men team up to woo Roxanne, with Christian’s outer appearance and Cyrano’s words.

The title role is an actor’s dream, encompassing comedy and pathos, swordsmanship and fighting skills, verbal agility, and charm. Stepping into the boots (and wearing the prosthetic nose) of Cyrano, John Colella gets it more than right. Initially seeming like a swashbuckling stand-up comic (“I never travel,” he says, “without my insults fully laundered”), his performance gains in depth with each act, finally moving one to tears. He is the center of the play and it would not work without his stalwart efforts.

While Olivia D’Abo is playing Roxanne at most performances, Cloe Kromwell filled the role on the day of this reviewer’s visit. She brought a quiet intelligence and some subtle stubbornness to Roxanne.

Also notable in the cast are Jonathan Redding, who as the nobleman De Guiche, gives his character a believable cluelessness; and Mark Rimer as Raggeneau, the baker who loves poetry. Kudos here to Allen for not omitting from the somewhat edited text (translation and adaptation by Anthony Burgess) Raggeneau’s recipe for tarts in the form of a poem.

It’s nice to see a reenactment of a world in which poetry is an important part of the cultural life and romance, even one-sided adoration, makes life worth living. For those who want to escape from action movies and overproduced pop singers into a time of gallantry, this “Cyrano” is recommended.