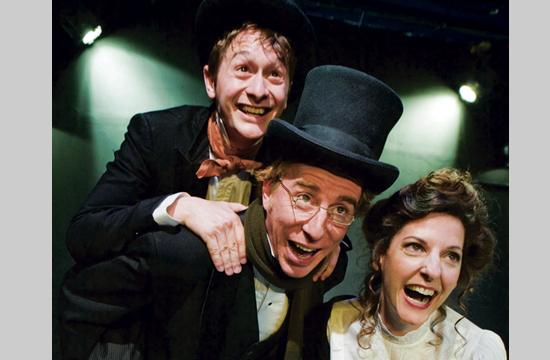 Nothing in literature says Christmas as much as Charles Dickens, so it is appropriate that the Impro Theatre Company’s production of “Dickens Unscripted” has arrived at the SMC Performing Art Center’s Edye Second Space in time for the holidays. But if you are expecting serious and sentimental Victorian drama, forget about it. The Impro Company brought us “Jane Austen Unscripted” last year and in the same vein, they turn the world of Dickens upside down by making up their own Dickens-style story as they go along.

With a cast of 14 (not all the members of the company appear in each show), Impro’s members play an assortment of Dickens archetypes: cruel and greedy authority figures, working-class comic types, underworld types, butlers and other servants, and put-upon youngsters. Each show begins with the audience suggesting a theme that will be brought up throughout the evening. For the performance reviewed here, the secret word was “chocolate,” and somehow, chocolate kept getting mentioned and was a minor but absurd factor in the climax.

It is amazing to realize that there are no scripts for these Dickens facsimiles. With company member Brian Lohmann directing, the cast members hastily throw together a story line and wing all the dialogue and action. Their nimble wits (as Dickens himself might say) allow them to conjure Dickensian repartee and even narration in a style that combines observation, philosophy, and imagery. Some examples of dialogue: “One could open an envelope with his face. That was how sharp it was” and “Your grief is translucent but your reasoning is opaque.”

The show seen by this reviewer seemed to mix character types and situations from such works as “Nicholas Nickelby,” “Oliver Twist,” “Great Expectations,” and of course, “A Christmas Carol.” At the Gray Market School for Boys, nasty Bertram Crump (they get the Dickens style of names right too) and his nastier wife abuse a mysterious boy named Gordon Brown, who came to them with half of a torn piece of hotel stationery as his only identification. Brown escapes, goes to London, is taken in by an eccentric working-class couple, and is pursued by a hired thug sent by the schoolmaster. In the meantime, Lady Chartwell plans a beggar’s banquet and Mr. Brompton holes up at the Strand Palace Hotel, where grief has driven him into isolation. Is there a connection between all these people? What will happen to poor little Brown?

While the silly names like Malcolm No Mouth and the fly-by-the seat situations (one actor plays three parts and has to dash across the stage to keep all three characters going at the same time) provoke belly laughs, the recreation of Dickens’ concern for the very poor and the abused children of 19th century England comes across almost as strongly as in the original novels. One wants to worry about the fate of the oppressed characters. But suddenly that abused youth is playing an obsequious butler and you remember that it is only an improvised comedy and it’s all right to laugh.