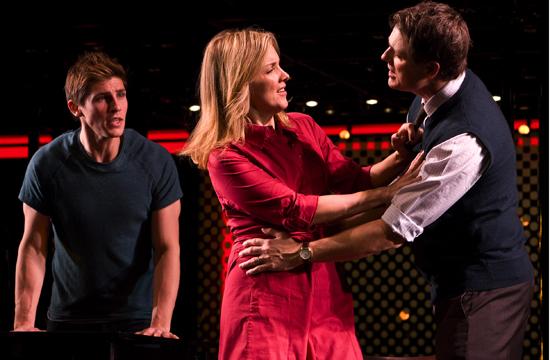 It’s hard to believe a story of mental illness, gut-wrenching grief and a crumbling family could be set to music with a modicum of success. But such is the case with “Next to Normal,” the national tour of which opened at the Ahmanson Theatre in November. The Tony Award and Pulitzer Prize-winning musical is a brave attempt to make sense of bipolar disorder and the havoc it wreaks on otherwise ordinary American families. The performances astound and the score impresses.

Alice Ripley is the big draw here. The standout performer of the show, it’s no wonder she received the 2009 Tony Award for Best Actress for her portrayal of a suburban housewife headed straight for rock bottom.

Diana (Ripley) is your average housewife, one who makes school lunches, keeps an organized house, and knows how to keep her hardworking husband happy…or so it seems. The illusion of Diana’s ordinary life is shattered early on, as her morning ritual of making sandwiches for the kids devolves into a frantic, directionless flurry of activity that finds her crawling around on the kitchen floor slapping cold cuts on scattered slabs of bread. So now we know – something is very wrong with Diana, and it’s an ailment that her husband, Dan (Asa Somers), daughter, Emma Hunton (Natalie) and son, Gabe (Curt Hansen) have been dealing with for nearly two decades. As Diana visits psychiatrists, flushes her anti-depressants down the toilet, and swings from elated, emotional highs to dark, depressive lows, it becomes clear that she is slowly killing herself and her family.

The true kicker comes when it’s revealed that Gabe is a ghost, an idealized image of a son who died in his infancy. This is the event that kicked off Diana’s mental illness and she can’t let go, can’t grieve, can’t give of herself to anyone but her dead son.

The hard-driving music with its rock-n-roll roughness is the perfect fit for this story of family upheaval. All the actors show up with stellar performances, but Ripley indeed steals the show. Tom Kitt’s music, Brian Yorkey’s book and lyrics, and Michael Greif’s direction create the perfect storm of theatrical excellence.

It’s nice to see a show that started small reach such spectacular heights in less than three years’ time. The musical originally opened at Off-Broadway’s Second Stage Theatre in 2008. Producer David Stone brought the show to Washington D.C.’s Arena Stage where it was reworked, and then back to Broadway. And the fact that it isn’t typical Broadway fare makes this dark musical’s success all the more sweet. Finally, a big, mainstream musical that asks audiences to think and feel outside the box.