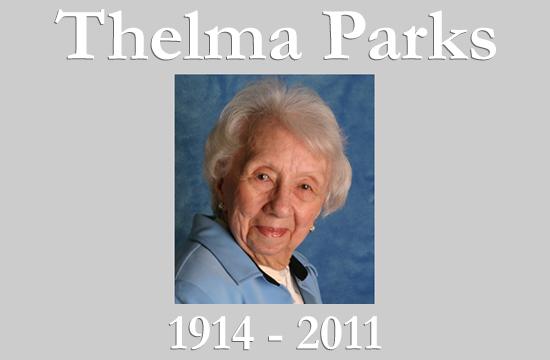 Thelma Parks, who worked at the Santa Monica Convention and Visitors Bureau (SMCVB) for the last 23 years, died on Jan. 15 at St. John’s Hospital at the age of 97.

A statement from the SMCVB quotes her as once saying, “Having found myself a tourist many times, I enjoy putting the visitor first.”

A fellow CVB travel counselor, Fred Basten, told the Mirror that Parks had “a sharp mind, she was interested in everything, loved life, and had to be at every event in Santa Monica.” He also recounted how they left notes for each other at the office since they worked different shifts. Looking for her note was always one of the first things he did when he came into the office.

The Mirror also spoke with Elizabeth Wilsonhoyles, a friend of Parks and the Director of the Guest Services for the Huntley Santa Monica Beach Hotel. She always called Parks if she couldn’t answer questions from the hotel’s guests because “she would have the answer.” She also mentioned Parks walked or rode the bus everywhere and “knew the bus service like the back of her hand.”

Parks was born in Brisbane, Australia and settled with her husband Harold, (an Army Corps bombardier during WWII), in Santa Monica in 1985 to be near their daughter, Adrienne. Wilsonhoyles noted how proud she was “of her Australian affiliation but that she was also proud to be an American.”

Thelma also acted briefly as a concierge for the Huntley Santa Monica Beach Hotel and recently completed her first book about growing on the Brisbane River.

The statement from the CVB states that “in honor of Thelma’s devotion to her community to making every visitor feel welcome, [the CVB] is introducing the “Thelma Parks Customer Service Award,” recognizing local Santa Monica hospitality industry personnel who exemplify exceptional customer service and genuine spirit. Santa Monica CVB will place a plaque at the visitor information kiosk in Palisades Park that will include the names of the annual award recipients. Nominations for the Thelma Parks Customer Service award will open at the Santa Monica Tourism Summit in May 2011.”

In addition to her daughter, Adrienne Parks, Thelma is survived by her extended U.S. and Australia family, second cousins, nieces, and nephews, as well as her beloved Santa Monica Convention and Visitor Bureau and tourism industry colleagues and other Santa Monica friends.

In lieu of flowers, the Parks requested that non-taxable donations be made in her name to serve our four-legged friends: Retrievers and Friends of Southern California, Inc. PO ox 1822, Temecula, CA 92593.

For information on the memorial service, please call Santa Monica Convention and Visitors Bureau at 310.319.6263