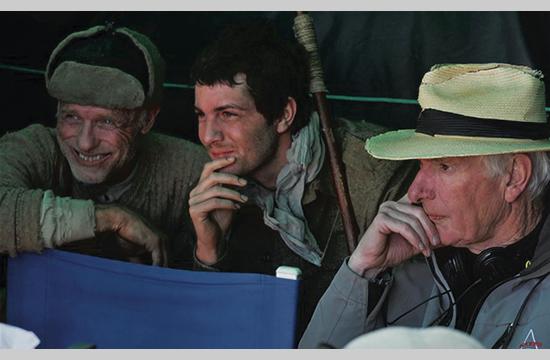 Peter Weir’s directorial credits are legendary and include some of the most memorable films ever made – “Witness,” “The Year of Living Dangerously,” “Gallipoli,” “Dead Poets Society,” “Picnic at Hanging Rock,” “The Mosquito Coast,” “The Last Wave,” “The Truman Show,” and “Master and Commander: The Far Side of the World.”

His most recent directorial endeavor is “The Way Back,” a war drama starring Ed Harris, Colin Farrell, Jim Sturgess, and Saoirse Ronan. The film follows a group of prisoners who escape from a Siberian Gulag during World War II. It was inspired by “The Long Walk,” a book by Slawomir Rawicz.

The following interview took place at a recent press conference to discuss the film and has been edited for print purposes.

The actors in this film faced some pretty rugged physical demands. How tough was it for you as the director?

Weir: It was tough, but the best thing you can do is to control the circumstances. In this particular film, I think the realism helped the actors a great deal, which was my plan. I think being in the real locations made them feel they were part of what likely had happened to the escaped prisoners on which this story is based. I personally wasn’t bothered too much by the physical side, but I did injure my knee.

How much rehearsal did you do before filming a scene?

Weir: I don’t rehearse before the production begins. I’m not from a theatrical background where scenes are worked out in some stage space. On the shoot itself, because we were moving so fast, I pretty much had to have a blocked out plan as to how each scene would work. However, with more time, I like to see the actors find something on their own so I get their ideas before I put mine in because often enough they have better ideas. But in this case, because the clock was ticking away, we had to jump out of those vehicles like some sort of SWAT team – ready to shoot and go. Invariably we had to move to another location some distance away the next day and it wasn’t possible to return to a location. But the actors had done their work privately and had gotten into their characters, for which I was very grateful.

You shot some of the earlier scenes on a sound stage, but how important was it to shoot on multiple locations?

Weir: Your question, almost word for word, was asked by my First Assistant Director when we started the planning. He said ‘very important, right?’ And I said, ‘yes, very important.’ He said from his own planning point of view, apart from the actors, the makeup and wardrobe people are going to be driven crazy if we jump. For example, how different would the characters look three weeks hence?

Some of your films seem to have the theme of man’s struggle with nature, such as in “Master and Commander: The Far Side of the World.” Is that something you consciously think about when deciding on a project?

Weir: I’m only beginning to realize that is a recurring theme since we’re talking about it today. I don’t normally think about it, as each film is a fresh start – each different from the other. Inevitably a director has to leave his fingerprints over the years. It’s curious though as I do see this landscape question come up and I wonder sometimes if it’s something to do with being Australian. We huddle around the coasts of this vast continent. I remember an incident from 30 years ago where I rented a car in Broken Hill, (New South Wales Outback) and was heading out to the desert highway. There weren’t any other vehicles around and I got a sense of the curvature of the earth. I remember pulling the car off to the side of the road on this beautiful desert day and lying down on my back on the center of the highway as if I was at a beach resort. I’ll never forget experiencing that great, vast emptiness.

Are you partial to a particular genre of films?

Weir: I’ve given this some thought. For example, I don’t think I would have done “Social Network” if it were given to me, as I don’t believe I would have been the right man for it. It was a well-made dialogue-driven picture and I enjoyed it very much. I don’t have a particular prejudice. On the other hand, I am fascinated with silent films, which were more different from sound films than we realized. People think we just added dialogue, but actually it was an entirely different art form. To borrow Jean Renoir’s words, there was something hypnotic between a close-up of a star on screen and the audience, who he felt were hypnotized by the images and accompanying music. So I am drawn to that.

Was that idea reflected in “The Way Back?”

Weir: I certainly explored that idea where there were just faces and no music, shooting almost like I was shooting landscapes because that seems to be the DNA of the film – landscapes and the human face and human nature and nature. So I did enjoy sitting on a shot of a person allowing us to dream the film for a short period.

So many films are like having a Chinese meal. You see one and need another film an hour later (laughter). Your films are unforgettable. I saw “Picnic at Hanging Rock” in 1975 and to this day it haunts me. What is your philosophy regarding filmmaking?

Weir: Back in the ‘90s, I was struck by the tragic Mount Everest climbing accidents when in one particular season, several highly experienced guides made fundamental errors. I don’t mean to diminish real tragedy by what I’m going say, but it’s almost as if a director is a guide, and even though you’ve learned a great deal over the years, each film is a mountain that is liable to bring you down. You can make a fatal error and lose the whole thing creatively. That stops me from taking a broad perspective and having any benefit from films other people have enjoyed. You start over each time.

What is the distinction between “based on the book” and “inspired by the book” (referring to Slawomir Rawicz’s novel, “The Long Walk: The True Story of a Trek to Freedom”)?

Weir: I loved the book but there was some controversy about whether the author was actually on the walk and unless I was satisfied that the walk actually took place, I could not do the film. So we got evidence that the walk actually happened and I was happy. I decided to dedicate the film to the unknown people who did the walk from a Russian gulag in Siberia to India. “Inspired by the book,” allowed me to change the title and introduce other characters, particularly the Colin Farrell character of Valka. I was drawn to the truth and wanted everything to be first-hand accounts. I did interviews with survivors in Moscow, Siberia, and London and incorporated some of those experiences into the script.

The film touches on death. Have you ever been close to death?

Weir: Yes once. It was during the filming of “The Year of Living Dangerously.” One weekend five or six of us went off to get some second unit shots in a light aircraft. We got into trouble up in the mountains, which were fogged in, and guided by radio we had to fly into a small mountain airport. It was one of those classic potential accidents that you read about. The pilot was agitated and now again we would hear a steady beeping sound in the middle of a white out and you knew you were close to land. We were lucky.

Why did you decide to include the female character of Irena, played by Saoirse Ronan?

Weir: She was one of the characters in the book, but a very different type of character. She was more innocent and a refugee. I was interested in reading backgrounds of young Communists who were arrested at the Hotel Luxe in Moscow. They were put into orphanages and had their names changed. I made that background up for the Irena character. There was never a doubt in my mind that it was potentially a great idea and maybe it really happened. The author was not on the walk, but certainly got a lot of information about the walk so maybe there was a girl. It was important that she not be of an age where there was a sexual question so I had to find the right actress and Saoirse (“The Lovely Bones”) was it.

What effect did her presence have?

Weir: The change happened with the actors’ characters. These macho guys softened up. Irena’s feminine sensibility civilized them and made them nostalgic, provoking memories of their own mothers, sisters, daughters, lovers, etc. But, it was very interesting to film and to wonder about what the feminine presence does to men. Saoirse is not a typical young actress. I mean she has fun and all that, but she’s not a show business type. I think of her as an old soul and everybody found their relationship with her on and off camera.

Did you seek studio financing?

Weir: The studios were not interested. They said they weren’t in that kind of business anymore and frankly, I was rather surprised. I think also that our timing was bad because changes were taking place in the industry. We have to remind ourselves that first of all there was “Titanic,” then “Lord of the Rings,” and the potential to make billions was there if you could get one of these franchises. So it was like a gold rush and the studios didn’t want to just make a nice tidy profit of $20 million.

We look forward to your next masterpiece, with or without studio involvement.