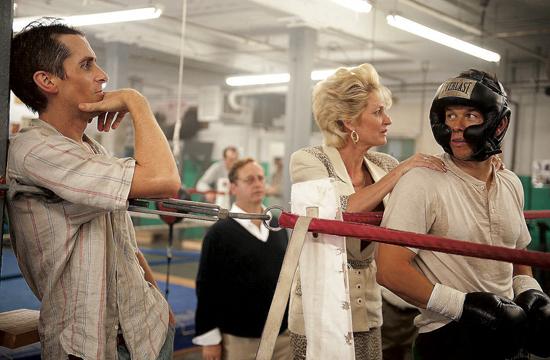 It’s no wonder Christian Bale won a Golden Globe for his performance in “The Fighter.” The actor’s high-strung portrayal of a skilled boxer-turned-crack-addict on the gritty streets of Lowell, Mass. included a total physical makeover and a channeling of sorts that left barely any trace of the buff lead actor who starred in the recent “Batman” movies. Melissa Leo also rightly took home a Golden Globe for her powerful turn as a mother on the brink.

Based on a true story, the film centers on two boxing half-brothers, Dicky Eklund (Bale) and Micky Ward (Mark Wahlberg). At the outset, we learn that Dicky, a boxer once so talented he won the moniker “The Pride of Lowell,” has traded his sporting dreams for the crack pipe. Gaunt and full of manic, drug-induced energy, Dicky still steps into the ring on a regular basis, but only to train his straight-laced brother, Micky, who is losing fights due to Dicky’s inconsistency and the mismanagement of Micky’s career by the brothers’ mother, Alice (Leo). Just when Dicky and Alice are about to send Micky’s career straight into the toilet, Micky meets and woos Charlene (Amy Adams), a bartender with brains, brawn, and a fast aversion to Micky’s family’s mishandling of Micky’s career. With Charlene’s help, Micky breaks free of his family, finding a trainer who can take him to victory. But blood runs thicker than water in this blue collar, Massachusetts neighborhood and Micky finds himself torn between family loyalty and self-preservation.

Both Wahlberg and Adams got Golden Globe nominations, but neither nabbed a statue. Had this entire cast gone home on Globes night with awards in hand it would not have been a mistake – every actor digs deep to tell a story that is as ugly as it is poignant.

A sub-story runs alongside the main one, that of a documentary film crew tracking Dicky, following him to the crack house where he loses his mind daily amid filthy mattresses and unsavory company. Dicky swears the film is about his pending comeback, but the filmmakers are clear that it’s about the dangers of crack cocaine.

Director David O. Russell (“Three Kings,” “I Heart Huckabees”) moves this outstanding ensemble to the outer limits of their collective talent. Whether capturing the ugly underbelly of addiction or the minimalistic nature of boxing, Russell shines. The subplot is as powerful as the main event, a filmmaking feat that keeps audiences hooked for the duration.

Though boxing movies are nothing new, this one is worth a look. And fans of the sport will be happy to discover that the action in the ring is significant; not just a series of quick sparring clips, but meaty, head-to-head battles that are skillfully choreographed.