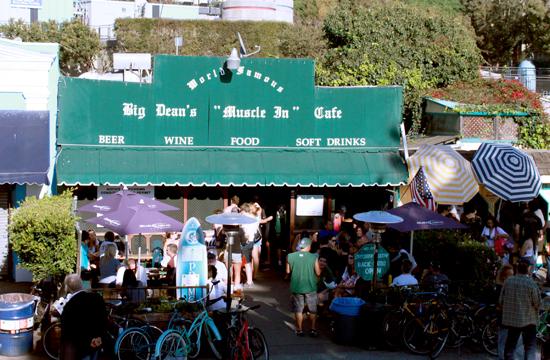 Big Dean’s “Muscle In” Café which is located at 1615 Ocean Front Walk has been an institution in Santa Monica since the 1970s. Now, it is going to expand its Ocean Front Walk patio by adding 24 additional seats.

The Planning Commission gave the go ahead for the expansion unanimously on Jan. 19. A parking variance was also approved so that the additional three off-street parking spaces required for the addition could be waived. The waiver was supported because many of the patrons come to the café on foot, by bike, or by skateboard.

A Conditional Use Permit (CUP) also had to be approved for the expansion because the café wants to continue to sell beer and wine. It had been selling these alcoholic beverages without a CUP as a legal, non-conforming alcohol outlet. The applicant’s architect, William Dale Brantley, was concerned that by having to acquire a CUP the café’s alcohol sales would be capped at 35 percent of gross sales because that has been the standard in the city since the 1990’s for restaurants. This was done according to city Planning Manager, Amanda Schachter, to help control restaurant business operations “to make sure food is served.” Brantley noted that many times the Big Dean’s alcohol sales hit 49 percent which is permitted by California’s Department of Alcohol Beverages Control Board. He also explained that this level of alcohol sales was needed to keep the alcohol prices at the café down. The commission decided to allow their alcohol sales to go up to 49 percent of their gross receipts.

Commissioner Gwynne Pugh summed up the commission’s overall sentiment about the café’s request for extended operating hours when he stated, “they are a good neighbor and operate responsibly.” Commissioner Hank Koning noted their location which is adjacent to the Santa Monica Pier means “they are not next to residential” so any concern about disturbing people who are sleeping with café noise should not be a concern. They will now be able to stay open until 3 a.m.

Prior to the approvals, the commission heard from the café’s Manager, TJ Serati, who noted that the Big Dean’s is a “good alternative to the Pier” because it is less expensive than the restaurants on the Pier for burgers and alcoholic beverages.

Euclid Street resident Bill Parent who is a former bar tender described his observations as a weekend customer. “There is high turnover from people on the beach” and that it is an “extremely well run and well managed bar.”

The expansion will also include upgrades needed for the kitchen and restrooms to meet the current Los Angeles County Health Department and Americans for Disability Act requirements for operating a business.