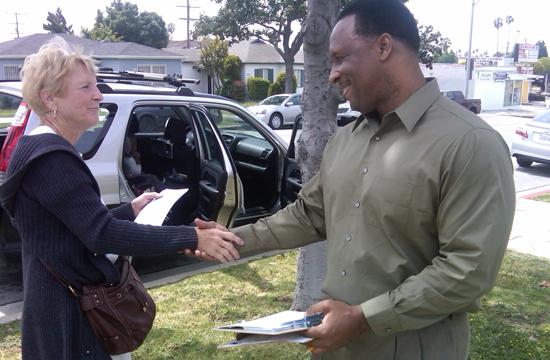 Tabor was originally the favorite with his deep roots in the community. He led the list of candidates in the November primary election, however he was unable to earn enough votes to claim majority and the office outright. He has served as mayor since August, when he won a runoff election to fill the vacated seat of former Mayor Roosevelt Dorn, who resigned amid controversy in January. Dorn had plead guilty of conflict of interest amid allegations of corruption.

Most recently Butts served as a deputy chief of Inglewood’s police force. Prior to that position, he was the Deputy Executive Director (assistant general manager) for Public Safety Los Angeles World Airports (LAWA) where he commanded the nation’s largest airport law enforcement and security organization. Butts’ LAX position was the one he left Santa Monica for in 2006.

“In terms of budget and personnel, his span of responsibility exceeded the size of the workforce and general fund budget for the entire City of Inglewood,” the Inglewood Today reported in June.

Butts was sworn in as chief of the Santa Monica Police Department in September of 1991 at the age of 38, making him the youngest chief of police in Southern California at that time. He was also the first African American man to hold a rank above sergeant in the department’s history. During his 15-year tenure, the SMPD significantly reduced violent crime in the city to a 50-year low. These historic reductions all took place while citizen complaints against officers fell by more than 50 percent, annual departmental liability dropped to unprecedented lows, and workers’ compensation absences decreased dramatically. Butts was replaced by current Chief Timothy Jackman.

As SMPD’s Chief, Butts’ commitment to diversity was reflected throughout the police department, especially in the management and supervisory ranks which were consistently recognized by his peers as having created one of the most technologically advanced departments in the region at that time. His frequent appearances at civic events, readiness to meet with community members, and easy accessibility to Santa Monica’s service recipients by both phone and e-mail had made him a well-recognized and respected public figure in the city.