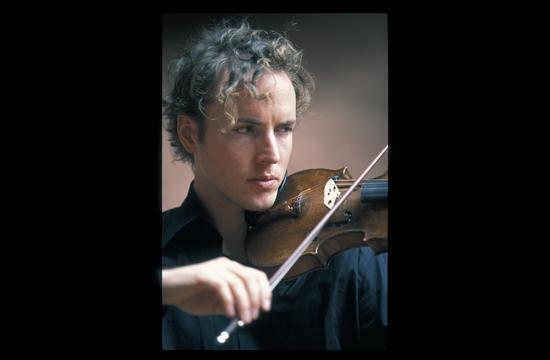 Timothy Fain hails from Santa Monica and grew up surrounded by “surfing and the movies.” But his skill with the violin has taken him to the world of symphonic halls. The New York Times praises his “technical finesse, lyrical ardor and cagey control.” In his early 30s, he has been a recipient of numerous awards and an Avery Fisher Career Grant, performed as a soloist with symphony orchestras and at major music festivals, was the “voice” of the violin played by Richard Gere in the film “Bee Season,” and can currently be seen and heard playing violin in “Black Swan.”

Fain’s talent started to be in demand while he was still studying at the Juilliard School in New York and he admits he missed classes because he was traveling and performing while still in school. He has been preparing for his career since childhood, when he received early lessons from his father and from two violin teachers.

“As a violinist growing up in Southern California, it was a little bit of a challenge sometimes,” Fain recalls. “We used to drive over an hour to a violin lesson every weekend.” Though he studied other instruments, the violin appealed to him, despite the rigors involved with playing, because “string instruments respond like a voice.”

After attending Santa Monica’s Crossroads School, Fain went on to The Curtis Institute in Philadelphia, “probably the best music school in the country.” He signed with a management agency while still at Juilliard (despite his touring schedule, he obtained a master’s degree).

In performance, Fain has played works by Beethoven, Tchaikovsky, Corigliano, and Phillip Glass, and has also collaborated with jazz artists like pianist Ethan Iverson, and composer-saxophonist Patrick Zimmerli.

Fain’s experiences with film have been interesting for him. When playing for Richard Gere in “Bee Season,” he felt that Gere made things run smoothly because he “really knew what he was doing. He’d spent months learning to look like a violinist.”

In “Black Swan,” Fain can be spotted in four or five scenes, during the studio class and during a dress rehearsal. “I was working with people who had really done their research and understood the world they were trying to portray.” Fain praises director Darren Aronovsky for wanting to find someone “who could not only play on screen but also play on the soundtrack. I think it adds to the movie because it’s real.” He also praises Golden Globe winner Natalie Portman for her hard work to make her dancing scenes believable.

A big event for Fain has been his work on a new piece written for him by Phillip Glass, “… one of the most well-known and most accomplished of American composers and I’m just honored and very psyched that I will be unveiling this work within the next year.” The piece is more than 30 minutes, in seven movements, for unaccompanied violin, and Fain says that a couple of the movements were undoubtedly inspired by Bach.

The U.S. premiere of this piece will be in New York at Symphony Space and in Omaha, Neb. at Kaneko. Fain will also be touring with Glass to perform the piece in Europe.

Fain has a CD on Image Recordings and is doing four concerts in the Los Angeles area this month, including the City Hall Municipal Gallery in Beverly Hills Jan. 23, and a KUSC live broadcast from LACMA on Jan. 30.

While he now lives in New York City, Fain is still a Santa Monica kid at heart and hopes he can do a concert here eventually. “Santa Monica does now have a performance space—The Broad Stage—that would definitely be a place I’d love to play in the future.”