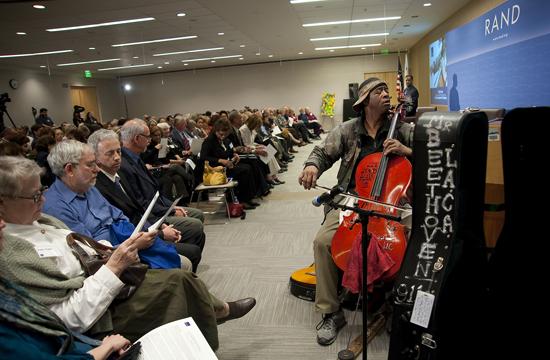 Mental illness has been in the national news lately as accused perpetrator of the shootings in Arizona, Jared Loughner, is possibly mentally ill. RAND explored the issue of mental illness on Jan. 26 at a policy forum titled “From Management to Recovery: Emerging Approaches to Serious Mental Illness.”

The forum began with a performance by Nathaniel Anthony Ayers whose struggle with mental illness was chronicled in Los Angeles Times columnist’s Steve Lopez’s book “The Soloist: A Lost Dream, An Unlikely Friendship, and The Redemptive Power of Music.” After the performance forum moderator Paul Koegel, an associate director of RAND Health, noted “1 in 17 Americans, about 16 percent of the overall population, have a diagnosis of serious mental illness such as schizophrenia, bi-polar disorder, or major depressive disorder.

Lopez, who was one of the panelists, said that his book about Ayers “is a story about somebody’s brother, son, an accomplished soul, a poet, a musician who had an unlucky break who is fighting every day to get back on track.” He then explained how at first the Los Angeles Times wasn’t that anxious to run his first column on Ayers because “we usually don’t see stories in the paper about someone who is dealing with a mental illness.” However, after it was run Lopez was struck by how much interest there was in his column so he continued to write more about Ayers. He also mentioned that mental health professionals also encouraged him to write to help destigmatize mental illness.

Koegel noted that not long ago treatments for serious mental illness “focused on treating symptoms and such people were expected to lead very constrained lives.” This has changed in the last 15 years and “recovery has emerged as the new signpost for a new way of approaching serious mental illness.”

Panelist and psychiatrist Alexander Young said there is more of a range of options these days including “better medications, a range of rehabilitation treatments such as supportive employment, … family intervention, and an increasing understanding of the biology of the illnesses.”

Lopez who has known Ayers for six years said that he was naïve at first in thinking “I would be able to figure out what was wrong with him and fix him.” The clinicians he consulted with had different ideas of what should be done. Lopez did not know what to do so for the last five and a half years “I’ve tried to just be his friend and be there for him.”

The audience asked Lopez about whether he was really attacked by Ayers as portrayed in the movie. Lopez responded that Ayers did not hit him and that this violence was added when his book was made into the movie.

An audience member asked Lopez if the media was largely responsibly in perpetuating the stereotype of the mentally ill being violent. “The media is responsible for the very stigma you are talking about,” Lopez responded, “That’s why I’ve written about mental illness to help address the stigma and humanize mental illness.”

Also participating in the panel was Ted Sapp, the executive director of The Nathaniel Anthony Ayers Foundation, which is developing Nathaniel’s Place – “to give artists that suffer with mental illness the opportunity to stay connected and share their gifts with the world through being able to interact with artists that are also mentors.”