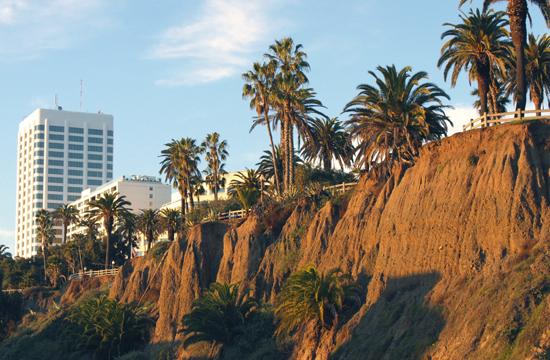 The Palisades Bluffs Stabilization Project was completed sooner and cost less than expected, something not often reported for the City’s capital improvement project.

City Engineer Lee Swain said the project was completed in April 2010, “two months early than contracted for.” The earlier completion date was made possible becausepartnering with the City of Santa Monica Caltrans allowed the City’s contractor to expand daily working hours for the project. Therefore, more work was accomplished each day.

The project’s cost of $1,775,200 was also significantly less than the engineer’s estimate of $3,500,000 to $4,000,000. Swain believes the city was able to get a lower bid on the project because the economy was were worse in 2009 than when the engineer’s estimate was made. The other reason Swain believes the cost was lowered was the city hired a specialist, Jensen Drilling Company, to do the work. Whenever a specialist is hired there is usually less overhead than when a general contractor is hired.

Another cost for the project was its construction management which was done by Vanir Construction Management for $389,330.

The Sept. 8, 2009 city staff report prepared for the City Council states that the project’s goal was to “remove groundwater that accumulates behind the bluff face to minimize future landslides” by installing horizontal drains. A total of eighty-two horizontal drains were installed at five different locations north of the California Incline. Approximately 18 drains were placed at each location and the drilling depths varied from 100 feet to 300 feet from the base of the bluffs.

Federal funds funded 80 percent of the project and the other 20 percent came from the city’s Redevelopment Agency funds.

Before the project can proceed both Caltrans and the City Council must approve the EIR.