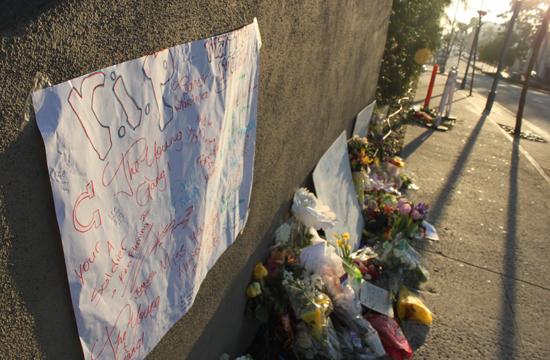 Matthew Mezza, the 14-year-old Santa Monica High School freshman and baseball player who jumped to death from the top floor of the Sheraton Delfina Hotel on Jan. 14 was buried Jan. 19 following an emotional funeral service attended by nearly a thousand mourners.

A female classmate said she found out about Matthew’s jump via text message from a friend and the text message indicated that Mezza was transported to a local hospital where he was pronounced dead.

Santa Monica Police Sgt. Jay Trisler referred the matter to the Santa Monica-Malibu Unified School District. In a statement addressed to district parents, Superintendent Tim Cuneo and Samohi principal Hugo Pedroza said “a student left campus and jumped onto the sidewalk from an upper floor of the Sheraton Delfina … He was immediately transported to UCLA hospital.” The statement added that counselors were on hand at Samohi cafeteria to assist students and their families who needed support.

Santa Monica police cornered off the stretch of Pico Boulevard between Second Street and Lincoln Boulevard well into the night while Samohi varsity boys and girls basketball teams hosted Culver City in back-to-back games in the North Gym.

A Santa Monica police officer at the scene told the Mirror that the victim may had jumped from the ninth floor of the hotel and was seriously hurt but may not have died. The officer also added that homicide detectives were en route to the scene.

Matthew’s classmate said she was close to him and described the boy as a “very smart kid [who] would tell me these interesting facts that I would have never known.” While Matthew was close to a temple and its youth group, but “he didn’t really open up to many people,” she said. “Baseball was a big hobby of his.”

Mezza was buried at Hillside Memorial Park and Mortuary following a service on Jan. 19 attended by hundreds of mourners. His family has asked that in lieu of flowers donations are made to either the Santa Monica High School baseball team or suicide prevention program Teen Line.