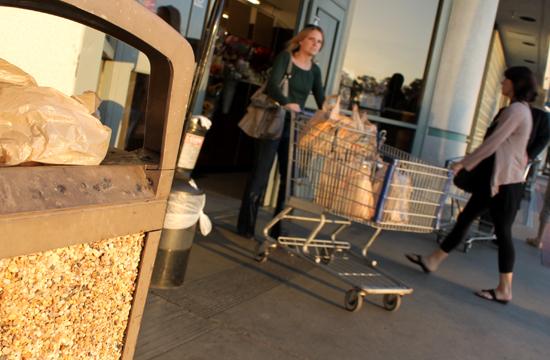 In the face of threatened litigation, Santa Monica’s City Council banned single-use plastic bags in a vote that was the culmination of three years of work by advocates, environmentalists, and concerned citizens.

Projected to take effect in September 2011, the ordinance will prohibit all retail establishments in Santa Monica from providing light weight, single-use plastic carry-out bags to customers and prohibits the free distribution of paper carry-out bags by grocery stores and pharmacies in the city.

This will affect 1,870 establishments in total, including supermarkets, convenience stores, mini-marts, and liquor stores. Dean Kubani, the director of Santa Monica’s Office of Sustainability and the Environment reported to the council that these types of stores are the largest current providers of single-use plastic bags in the City, distributing at least 26 million bags annually.

“Santa Monica taxpayers are paying to clean up these bags that are being given away free by these stores,” Kubani said.

Should grocery stores and pharmacies decide to make recycled paper carry-out bags available, the ordinance requires that those establishments pass the cost of at least 10 cents on to their customers. This fee is intended to discourage customers from using plastic bags and incentivize the use of reusable bags. Revenue generated from this fee are to be retained by those stores, which the City argues exempts the fee from the recently passed Proposition 26. Of the nearly 1,900 businesses affected plastic bag ban, 95 will be required to pass along the 10-cent minimum cost for paper bags.

City staff estimate the initial cost of additional staff and supplies and expenses to implementation of the ordinance will be $60,000. Kubani said this cost will be covered by savings in the current year budget. Funds for implement the ordinance in subsequent years will be requested in future budget cycles. For fiscal year 2011-2012, staff estimates an additional $115,000, and then $75,000 annually in subsequent years.

The ordinance included exemptions for 402 restaurants, 144 food trucks, and a smaller and fluctuating number of farmers’ market venders. The ordinance does not prohibit the distribution of plastic “product bags” such as those distributed within a grocery store for bagging produce or meat products. Farmers’ Markets are allowed similar exceptions, and are allowed to provide small paper bags for mushrooms to customers free of charge.

The ordinance provides a public health and safety exemption for restaurants that allows them to provide plastic bags only for the transportation of hot prepared take-out food and liquids, which may leak into and weaken a paper bag.

Juli Schulz of the Surfrider Foundation, who said she spoke on behalf of 5,000 members, applauded Santa Monica’s ban. She said, “We’re out there cleaning up the beaches and the number one thing we’re picking up are bags. They are not recycled; they are blowing in the wind; they are out there killing seabirds and animals. We’re sick of it.”

Passing of the ban has been a long process for Santa Monica, which set out thinking it would pave the way for other cities to follow. As early as 2007, advocates appeared before the council in favor of enacting a bag ban. In February of 2008, council directed staff to prepare a bag ban ordinance, which they completed in January of 2009. However, voting on that ordinance was stalled by plastic bag manufacturers who threatened litigation if the City did not conduct a thorough California Environmental Quality Act (CEQA) review. Council heeded the advice of the City’s attorney and did not proceed with the ordinance at that time, but did hold a public hearing. By the time the CEQA was completed in 2010, a statewide ban was gaining momentum. To avoid a potential redundancy of a potential statewide mandate, Santa Monica waited, but AB 1998 ultimately failed.

Council’s next attempt, in November of 2010, was again delayed when California voters passed Proposition 26, which reclassified many government fees as taxes including the one attached to the City’s proposed bag ban. Under Prop 26, Santa Monica’s proposed bag ban would have required a two-thirds approval from voters or the legislature. So Santa Monica City staff went back and tweaked the ordinance. As it reads now, stores retain revenue from the recyclable paper bag at the time of sale fee – no funds are raised to fund any government agencies which is what Prop 26 prohibits unless approved by a two-thirds voter approval or by the legislature. With the last obstacle perceivably surmounted, staff brought the bag ban before the council on Jan. 25, 2011 and the ordinance was passed unanimously (three council members were absent).

While this tale unfolded, other communities leapt ahead of Santa Monica and joined places such as Washington D.C. and Ireland in banning single-use plastic bags. But as Council member Kevin McKeown pointed out, many of those communities are in court, facing lawsuits brought on by plastic bag manufacturers, the American Chemistry Council, and the Plastic Bag Coalition. Many of those cases are yet to be decided.

“We’ll pass an ordinance that will stand up in court…that is going to stick and that other communities can then follow,” said McKeown prior to approval of the ordinance. Kubani’s extended, excruciatingly detailed, and more-than 25 minute report to the council prior to the vote was in part an exercise to publicly outline the City’s legal standpoint in an attempt to block litigation from those entities.

Council member Terry O’Day acknowledged local community and environmental organizations, City staff, community members, and even a cabal of Santa Monica High School students, all of whom were instrumental in blazing the path that led to the ban.

“We may not be the first to do this tonight, but we have stood in lockstep with all those other jurisdictions that have gone before us,” he said. “They have taken strength from our position and knowledge that we would be moving in this direction.”

Stores will be required to report to the City’s Office of Sustainability and the Environment the number of paper bags distributed and the amount of money they collect from the cost pass-through for the bags on a semi-annual basis. These reports will allow the City to track store compliance with the ordinance, but more importantly will give the City a gauge by which to measure the ban’s effectiveness at reducing the use of single-use bags. Staff will periodically present these results to the city council and to the community as they become available.

The meeting was highly attended, including about 30 Santa Monica High School students, all demonstrating visible enthusiasm about attending a city council meeting, taking videos of each other on their iPhones. Also in attendance were a few members of Boy Scout Troop 85. Five of the Samohi students spoke before the council supporting the ban, as they have been doing since this topic first came before the dais in 2007. One high school junior covered himself in dozens of plastic bags from his neck to his knees. Yet another high school kid sported a baseball cap with about a dozen smashed plastic water bottles. Even more, one high school female covered herself from head to toe with more than 100 plastic bottle lid tops.

Despite a reminder from Mayor Richard Bloom that applause is forbidden in the council chamber, the crowd periodically applauded or lauded speakers. But all that paled compared to a joyous burst of clapping and cheering once the ban was approved.