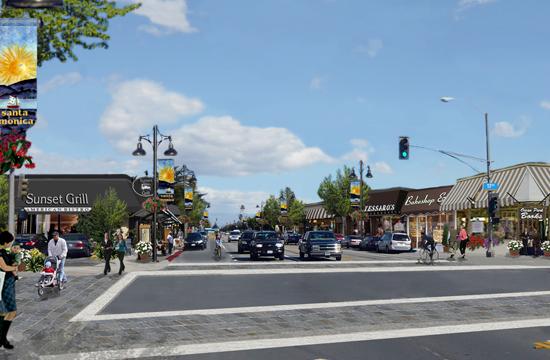 Santa Monica’s City Council approved the Land Use and Circulation Element (LUCE) update to the City’s General Plan in July 2010 after a six-year process that included extensive community input. On Jan. 25 the council took the next step when they unanimously approved an interim zoning ordinance to begin the implementation of the LUCE.

During this 60-day period of the interim ordinance, citywide development review permits for projects over 32 feet will be forced to seek development agreements (DA) – which are agreed to when a developer asks to build a project with parameters that are outside the City’s zoning standards in exchange for more public benefits than are normally required, such as more parking, affordable housing, or open spaces.

Ultimately, these DAs face the approval of the Santa Monica City Council – a scrutiny heightened by revelations last year of multiple instances of developer noncompliance regarding DAs. In the past these kinds of projects in Downtown Santa Monica only needed an administrative approval, which is a much simpler and less expensive process.

Exemptions to the interim ordinance are the Third Street Promenade projects that are less than the existing building height and floor area and 100 percent affordable housing projects of up to 50 units.

The ordinance will go into effect on March 11 and remain in effect for 60 days. It will apply to projects that have not received their final discretionary planning approvals by March 11. After that it can be tweaked as needed. Citywide administrative approvals for other projects during the 60 days will be based on more restrictive LUCE zoning.

This ordinance is a transition toward the LUCE, which delineates the distribution of different types of buildings (housing, business, industry, open space, etc.) also sets out the location of existing and proposed roads, highways, and other modes of transportation. This update will help determine the guidelines for the City’s development over the next 20 years – kind of like a master plan.

The more than thirty people who gave community input on the item to the council were mostly in support of the interim ordinance. Ocean Park Association president Jan Ludwinski said “It’s high time to put [the LUCE] into place without exceptions for all developments not currently approved.”

Prior to the council vote, the City’s director of Planning and Community Development, Eileen Fogarty, noted that in many communities a moratorium is put into place before a new LUCE (with a different direction) is implemented. However, Santa Monica “has wisely chosen not to implement a moratorium but to look at interim and temporary zoning ordinances as a way of giving the City the opportunity to prepare and determine community benefits, priorities, standards to protect neighborhoods, and to reduce green house gas emissions.”

The City’s Special Projects manager, Jing Yeo, stated that the ordinance “…would likely affect five of fourteenprojects that are pending planning review.” It will also be compatible for the updated Downtown Specific Plan that is currently being worked on and will be completed in the spring of 2012.

Valarie Griffin, the chair of the Wilshire/Montana Neighborhood Coalition, wanted the ordinance to “take effect as soon as possible.” She then added “the line between old rules and new rules has to be drawn somewhere. Failure to apply rules for major downtown projects starting now could seriously hamper the balance that would make the LUCE work.”

Santa Monica-based architect David Hibbert disagreed by stating “when we went through this process we were assured over and over again the downtown was not part of the LUCE process,” that the downtown standards that had been tweaked in 2006 would stay intact.

Attorneys for clients with projects in the pipeline that include housing expressed great concern about the interim standard that would require them to go through the more complicated DA process before their project could go forward.

Chris Harding, a Santa Monica land use attorney, expressed concern that the interim ordinance “would make it more difficult to get affordable housing downtown.” He and the other attorneys all praised the current administrative approval process for downtown housing projects which helped to incentivize having more downtown workforce and affordable housing units to be constructed as part of mixed-use projects in the last decade.

Mayor Richard Bloom agreed when he said he was concerned that the “momentum over the last decade” that resulted from downtown incentives for housing should not be lost. He then suggested that the council add some incentives to the ordinance such as an expedited process for projects that meet certain LUCE goals. His colleagues agreed so when they approved the interim ordinance they asked City staff to come back with suggestions on how to keep the downtown development momentum going.

The city council’s vote aligned with the Santa Monica Planning Commission’s unanimous endorsement of the interim ordinance approach, requiring DAs for projects with heights over 32 feet, and its downtown approach. The commission supported the applicability of the interim ordinance to projects in the pipeline but that was by a vote of 4-to-3 due to concerns about fairness.

Planning Commissioner Ted Winterer told the council, “I think it’s good public policy to move forward with the ordinance even though [some] people think it’s unfair. More importantly, it’s fair to the entire community that the standards that we have in the LUCE apply to all projects we have in the pipeline.”