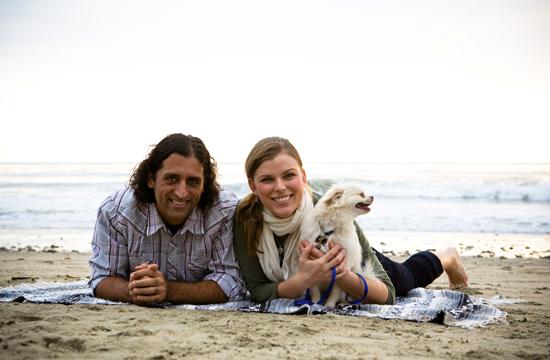 Together, the pair will embark in March on a 5,000-mile crossing of the South Pacific through sometimes treacherous waters to hunt down bits of plastic and study the effects of plastic pollution on marine life. The results of their work promises payoff not only for the health of the ocean, but also for the education of SMC students and the general public.

“I really truly believe that this is important work to do now,” said Baghdasarian, who is also chair of SMC’s Life Science Department. “I’m excited but at the same time I’m preparing myself to be devastated, to go out into the green pristine oceans and see these plastics.”

SMC is helping fund Baghdasarian’s trip – to the tune of about $9,000 ($5,000 from the SMC Foundation’s Chair of Excellence program, $3,500 from the SMC Global Citizenship Council and $500 in professional development funds. He also received a $5,000 Foundation “Margin of Excellence” grant for equipment). But he and his wife are working to raise several thousand dollars more to cover costs.

The pair is joining a leg of an expedition by The 5 Gyres Institute, a Santa Monica-based nonprofit that is exploring the world’s oceans in the most exhaustive survey of marine plastic pollution ever done. The 5 Gyres refers to the five areas in the world’s major oceans where plastic pollution – carried by currents – appear to accumulate, although these gyres are huge areas, sometimes larger than the United States.

Baghdasarian said that on the 10-week trip from Valdivia, Chile to Tahiti, with a one-week layover on Easter Island, he will focus on the effects of plastic particulates on plankton, and how that is affecting the food chain. He noted that since 1950 – the year plastics started being manufactured – there has been a 40 percent drop in phytoplankton in oceans all over the world.

Making matters worse, he said, plastic does not biodegrade for hundreds and maybe thousands of years. Instead it breaks into smaller and smaller particulates so that plankton is able to ingest the plastic just like many other species of marine animals that are eating larger pieces – and dying.

It’s not surprising that the two – who were married on the beach in Malibu – would be preparing for such an expedition, which will be on the Sea Dragon, a 72-foot research vessel.

Baghdasarian holds a Ph.D. from UCLA on the effects of global warming on coral bleaching, and the recovery of corals from these bleaching events.

Bayles started doing 20-minute beach cleanups locally in Santa Monica in 2009. Right away she found a disturbing amount of trash and decided to start weighing her collections, while setting a goal of 356 non-consecutive days that she documents on her blog, “The Daily Ocean” (http://thedailyocean.blogspot.com).

Bayles has found almost 700 pounds of mostly plastic litter while only halfway through her experiment. For her work, she was named a finalist for the 2010 Ocean Hero Award from Oceana, and her blog has been featured in the Los Angeles Times and is currently listed as one of the Top Ten Most Inspiring Acts of 2010 by Yahoo.

She will assist her husband in his research and will write, blog and take photos of the entire expedition.

“It is a bit scary to think that we will be sailing in some of the most isolated waters in the world, with the potential to end up in big storms, at times more than 1,300 miles from any major port or help,” Baghdasarian said. “On the other hand, I’m excited about the adventurous nature of being an explorer on a sailing expedition to discover the unknown and to play my part to help the environment.”