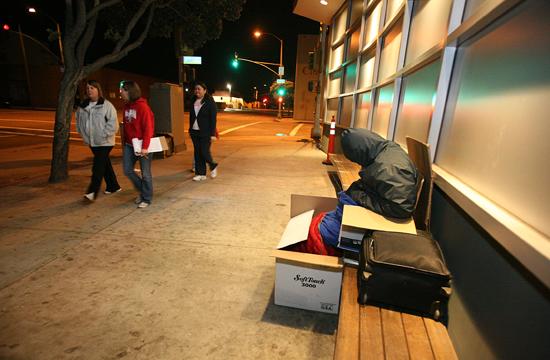 Mayor Richard Bloom stated at the kick-off event the data collected by the volunteers that night “becomes our baseline in determining how effective we are in addressing homelessness.” He then added “last year we saw the first drop in homelessness ever. We had a 20 percent drop.”

“The count tonight is part of the largest count in the country,” noted Margaret Willis, a City administrative analyst, during the volunteer training. The federal government requires that a count be done every other year, but Santa Monica started doing annual counts in 2010. This helps the City target its resources in a more effective manner, advocates and officials attest. The City has been doing a homeless count since 2005.

Willis also mentioned the count is a “street survey” but counts are also being done of individuals in emergency shelters, jails, and other facilities.

Willis told volunteers to judge if someone is homeless by looking at their appearance, behavior, and the conditions that surround them rather than by asking them “are you homeless?”

Volunteers were working late at night “so folks will be bedded down for the night,” which is a tactic aimed at reducing double-counting individuals who might be more mobile during daylight hours. The City was not only interested in how many homeless individuals could be found but also where the homeless were found so they could identify dense pockets of homelessness.

Each volunteer had his or her own reason for participating. Social Service Commissioner Christopher Taylor was participating for the third time because he wants “to be more engaged with the community.”

Santa Monica resident Ken Kofman was a new participant. He was interested “in the extent of homelessness at nighttime” and seeing what equipment they were using to sleep on the street.

Danny Luna came from Bakersfield. He is a supervisor for Child and Protective Services in Kern County and came because “he loves helping people and was curious to see if families are homeless.”

Two volunteers came from Santa Barbara. Sharon Byrne, Executive Director of the Milpas Corridor Association, came to learn what Santa Monica is doing on the homeless issue. She explained to the Mirror that Santa Barbara would be doing their first “homeless count at the end of February.”

One of the volunteer teams comprised three women who work for the Ocean Park Community Center’s Daybreak Program for homeless women with long-term mental illness. The team covered Santa Monica census tract 701900-C, a downtown area the size of about half a mile squared. The area included the Santa Monica bus yards, Santa Monica High School, the Santa Monica civic center, a section of the 10 freeway, and a few homeless service centers.

“This [area] is a hot spot” for the homeless, said team member Christina Dias, because of its proximity to shower and bathroom facilities at the beach and service centers, and because the streets are well-lit by retail stores. Team member Karen Smith noted, some homeless women spend the night riding the bus, where it’s safe and warm, or sleeping near the all-night coffee shops on Lincoln Boulevard, where there are lights and people.

Walking through the area, the team seemed to sense who is homeless and who isn’t. “If you look at their shoes, or their hands, you can tell who’s homeless and not someone going home after a late work shift,” said Dias. Because they have worked extensively with the homeless at OPCC and have experienced prior homeless counts, the team knew the types of places where a homeless person might be likely to settle in for the night – in the alleys, in front of stores, along certain streets.

After a little more than one hour, the team completed its count, tallying 12 unaccompanied homeless adults in their assigned area. One of the individuals was seen sleeping sitting up next to a medical building, dressed in a hooded down jacket, feet sheltered in a cardboard box, a small black suitcase by his side. “Seeing that still gets to me, even now,” said Dias.

Mayor Bloom told the Mirror he has gone out with the teams in the past but this year he “wanted to see the inside operation.” He attributed the city’s drop in homelessness to the many innovative programs the City has created. One of them is the service registry that gives intensive services to the city’s most vulnerable homeless individuals as determined by their length of time on the streets, age, and physical and mental health conditions. Another is the Homeless Community Court which uses the criminal justice system to encourage the homeless to participate in treatment by reducing or eliminating outstanding citations or warrants. Another successful program has been Project Homecoming, which gives transportation assistance to individuals who wish to be reunited with family or friends out of the area. Bloom noted that the City makes sure these individuals will have housing and other needed services where they are going because the “City is not trying to make our problem someone else’s problem.”