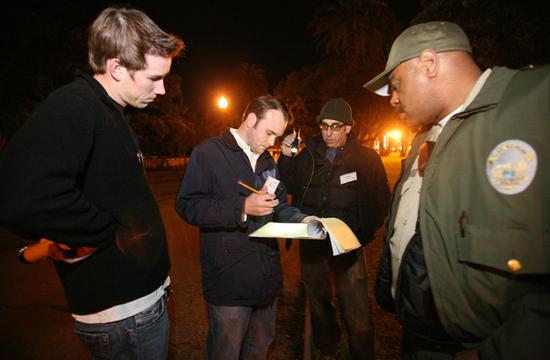 The sight of homeless people in Santa Monica can inspire a range of emotions and thoughts on what can be done to reduce, prevent, or eliminate homelessness in the city.

Next week offers a chance to participate in a positive step toward finding solutions, as organizers of Santa Monica’s 2011 Homeless Count are looking for 200 volunteers to help conduct a visual one-night count of the city’s unsheltered homeless population on Wednesday evening, Jan. 26.

With the help of volunteers, the count will capture the extent and geographic distribution of the city’s homeless at a single point in time. This information will be used to obtain federal funding, inform public policy, and guide the use of limited resources in getting individuals and families off the streets and into housing. Over time, the data will help reveal trends and measure progress toward preventing and ending homelessness.

Volunteering for the count is becoming something of local tradition for activists and concerned citizens.

“It was an eye-opening experience,” said Brian Chase, director of government affairs for Santa Monica’s Chamber of Commerce, who volunteered as a counter last year. “It was an excellent way to see another side of the community and get to know other Santa Monicans in the process.”

Santa Monica is one of several communities nationwide that will conduct a point-in-time homeless count this month as prescribed by the U.S. Department of Housing and Urban Development. While the U.S. census also counts the number of the city’s residents, including homeless residents, the census is conducted only once every ten years. Santa Monica’s City Council voted to conduct a full annual visual count of all 19 census tracts within city boundaries, giving the city a more current picture of its homeless population. Many jurisdictions, including Los Angeles County, conduct a count every other year.

“From 2007 to 2009 there was a significant reduction in our homeless population and we wanted to have better year-to-year data,” said Natasha Guest, administrative analyst for the City’s human services division. “We started some pretty major initiatives a few years ago and wanted to keep track of their effectiveness.”

Results of the Homeless Count will be compiled and reported initially to the Social Services Commission and the City Council, and shared with the Los Angeles Homeless Services Authority, the lead agency in the Los Angeles Continuum of Care. Results will include a map that plots the geographic distribution of the city’s homeless.

Homeless Count volunteers will meet at the east wing of the Santa Monica Civic Auditorium at 11 p.m. on Jan. 26, where they will receive training, maps, coffee, and a territory assignment. Working in teams and traveling on foot or by car, volunteers will then spread out to their assigned areas, where their mission will be to find and count the unsheltered homeless population in the area. Staff working at shelters, hospital emergency rooms, and other overnight housing facilities will count and report the number of sheltered homeless residents in their care that night. Collectively, every inch of Santa Monica will be covered.

The event will be held during late-night hours, when residents are more likely to be sleeping, to reduce the chances of double-counting the same individual at different locations.

Compared to last year’s count, this year’s event is organized to accomplish the same amount of work in less time. Natasha Guest estimates volunteers will be trained between 11 p.m. and midnight, and most volunteers will complete their work by 1:30 a.m.

Interested volunteers can RSVP by contacting Dina Aubrey at 310.458.8701 or dina.aubrey@smgov.net.