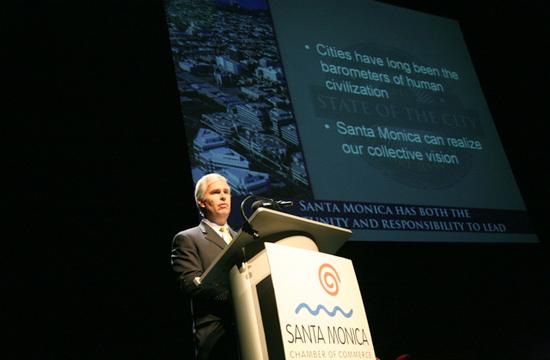 Nearly 400 residents and people hailing from local business, government, law enforcement, healthcare, and education filled The Eli and Edythe Broad Stage at Santa Monica College’s Performing Arts Center on Jan. 27 to take part in Chamber of Commerce’s State of the City 2011, in which City leaders hailed Santa Monica as a leading and iconic municipality.

As guests filled the foyer just outside The Broad Stage in the hours after sunrise and mingled with each other over a light breakfast and discussed one of several artistic renditions of future projects coming to Santa Monica, the highlight of the morning program was the State of the City address by City Manager Rod Gould, in which he boasted the overall health of the city and the prospects of its bright future despite the currently grim situations of the state and national economy.

“As a state, we must decide what services are most important and when we are going to pay for them. We cannot expect to return to long-term economic prosperity until the ship is righted,” Gould said in his address, themed “Santa Monica: Passport to Success.”

“Santa Monica is not immune to these pressures, especially due to its location on the edge of the sprawling Southern California megalopolis. But our fair city is well positioned for civic advancement in the face of these challenges due to its social, political, and economic strengths, including smart, sophisticated, and engaging citizens who strongly support sustainable and progressive local government action.”

Among the smorgasbord of issues and future plans Gould believed gave Santa Monica an edge as a leading city for “civic advancement” included academic excellence, environmental stewardship, advances in public safety, construction of new libraries, efficient water, and land use policy, development of affordable housing, and inroads in transportation reform.

Still, despite the positive words of a hopeful outlook for a Santa Monica that is economically, politically, and socially sound, both Gould and Mayor Richard Bloom pointed out that these are still trying times.

“We still have many challenges. The state budget is in a shambles. In our own community, there are vacant storefronts on Montana, on Main Street, on the Third Street Promenade, on Pico Boulevard,” Bloom reminded the audience. “We have our challenges, but let us all remember that we are working together to solve the many important issues that we have.”

Adding to Bloom’s statements, Gould provided deeper insight as to many of the challenges both Santa Monicans and Californians face.

“Santa Monica is experiencing historically high levels of unemployment as California’s unemployment rate stays stubbornly over 12 percent. Most economists feel this will persist for three to four years,” Gould observed. “Local businesses have struggled through this period as consumers seek to moderate spending and lower their debts. Shopkeepers have had to cut back hours, and some restaurants have ceased offering lunch. Some of our larger employers have pared back staffing and are faced with a post-recessionary uncertainty.”

Even more the City of Santa Monica’s budget and revenue streams have taken a significant hit in the past few years, resulting in recent ballot measures such as Measures Y and YY to help fill gaps between revenues and expenditures.

“The City saw its large revenue sources, including sales, property, utility, and business taxes plummet from 2008 to 2010, and are not likely to return to pre-recessional levels before 2013,” Gould added.

With that, Gould stated the City is doing its part to stop the bleeding and reestablish Santa Monica as a thriving economic center.

“We are charting a careful course of fiscal discipline to avoid the rocky shores of deep service cutbacks, layoffs, furloughs, and stagnation that have damaged so many cities before us,” Gould stated. “This means cutting for efficiency, not effectiveness, more than $8 million this year alone. This means deferring some capital projects we’d like to build but cannot afford to operate. And, yes, this strategy includes raising taxes – with the approval of Santa Monica voters.”

Gould also cited a proposed two-year budget that will be submitted to the Santa Monica City Council in May “which will set forth clear goals and objectives for advancing the city on many fronts,” including assistance law enforcement to bring crime rates to historic lows, working to eradicate homelessness, develop more affordable housing projects, and continue to be efficient in areas of land use, water, and transportation.

Just the same, Gould highlighted and boasted several future projects allowing Santa Monica to experience greater growth in the years to come, including the construction of the light rail Exposition Light Rail line through into and through the city, the development of a scenic park in downtown, the reconstruction of Parking Structure 6 in downtown, and the building of a new Pico Branch library, among others.

With a relatively positive outlook in spite of the trying economic times, Bloom attested Santa Monica has already come a long way and, in its current state, should make residents proud.

“I remember a times that was not so long ago when Santa Monica seemed to be in a constant state of turmoil and conflict. We were locked like scorpions in a bottle and fighting with one another and trying to solve issues but not do such a great job of it,” Bloom said. “Today, over the past decade, I truly believe we’ve found common ground and … learned to work together. We’ve learned by working together, by collaborating, we can achieve extraordinary things.”

Bloom went on to boast that Santa Monica is in quite an enviable position with a “robust” economy in spite of trying times and an example of how to be a model municipality.

“Let us not forget that Santa Monica stands tall in our region, in our state, and in our nation,” Bloom stated. “We are a jobs–producer in Santa Monica. Just think what things would be like in our country if communities like Santa Monica, regions like ours, were failing. Things would be so much worse.

“It is essential we … provide leadership for the new California, the California that will emerge from this current crisis.”

Among the Council members in attendance and the State of the City were Pam O’Connor, Terry O’Day, and Mayor Pro Tem Gleam Davis.

In addition to presentations and comments by both Gould and Bloom, the recently-opened Santa Monica Place was given the 2010 Economic Excellence Award.

A moderated panel of four local businesses, including Activision Blizzard, Agensys, The Lobster, and Revolution Fitness concluded the State of the City event; the panel was moderated by Brad Cox, chair of the Santa Monica Alliance.