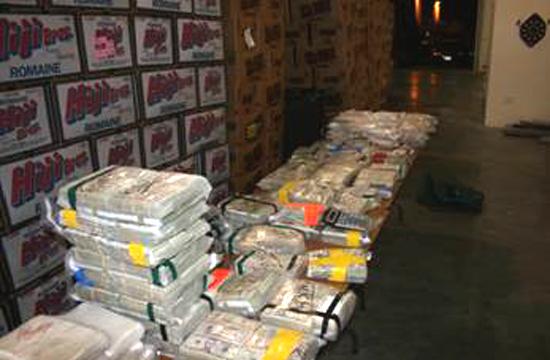 On Jan. 5, the Santa Monica Police Department (SMPD) took part in a multi-agency investigation which led to the surveillance of Vasile Babuschin, a suspect identified in a previous major cocaine seizure, as he arrived at Los Angeles International Airport (LAX) from Toronto, Canada.

Babuschin subsequently led federal agents and investigators to a residence in North Hollywood identified as a suspected drug residence as well as a warehouse and semi-truck in Valencia.

Then on Jan. 12 at 9:55 p.m., ICE/LAX federal agents, TFOs, and narcotics investigators from the SMPD, El Monte Police Department, Costa Mesa Police Department, and Anaheim Police Department executed three search warrants in Valencia and North Hollywood. A search of the warehouse in Valencia resulted in the seizure of 47 kilograms of cocaine and more than $2.3 million in U.S. currency. Los Angeles County Fire Department assisted by cutting open the safe.

Vasile Babuschin and Sergei Souetov, both Canadian citizens, were arrested and taken to the Santa Monica Police Department Jail. Both subjects have been booked for narcotics charges; ICE federal detainers were placed on both.