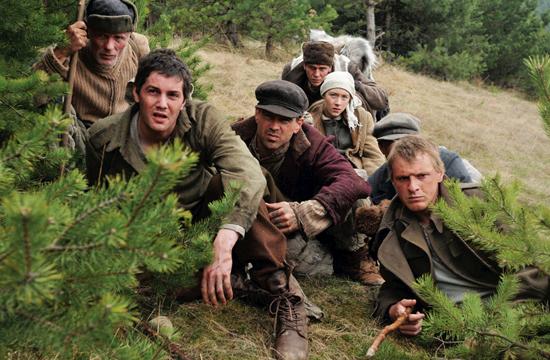 Jim Sturgess is a young British actor who has racked up credits on British television and cinema. His breakout role was as Jude Feeny in Julie Taymor’s “Across the Universe.” He has co-starred in “The Other Boleyn Girl” with Natalie Portman, Scarlett Johansson, and Eric Bana; in “21” he worked with Kevin Spacey and Laurence Fishburne; and he was in “Crossing Over” starring Harrison Ford, Ray Liotta, and Ashley Judd. Sturgess is also a musician and songwriter.

His latest role is that of Janusz, in Peter Weir’s stunning “The Way Back,” a compelling war story about the escape of a handful of prisoners from a Russian gulag. Janusz is an innocent man sentenced to the gulag as a result of his wife’s forced betrayal. He is determined to get back to her so he can relieve her of the guilt he knows she is feeling.

The following interview took place at a press conference to discuss “The Way Back” and has been edited for print purposes.

Was the shoot as difficult as it looked on the screen?

Sturgess: Yes, it was pretty rough sometimes, but we really had a good time. When it was cold, it was freezing. It was certainly the coldest I’d ever been and the hottest I’ve ever been as well. The desert was more difficult to deal with than the cold. But as difficult as it was, being outdoors energized you. Often when you’re make a film, you get up at 4 or 5 in the morning, but filming in the Sahara Desert you’re awakened by the morning prayer which is blasted over the loud speakers. So you wake up to Morocco coming to life and then you drive a two-hour journey through the desert to the next location as the sun is rising over the sand dunes. I saw landscapes and visuals that I’ll never forget.

Was there a difference between shooting on the sound stage and being on location?

Sturgess: It took me a while to adjust when we started shooting on location. I felt like I wasn’t giving a performance because most of the time it was totally real. There was no acting required when you are freezing or burning up from the heat.

How did you get the part?

Sturgess: Peter (Weir) was seeing English actors in London and had asked to meet with me. I was actually filming another movie and we had been doing night shoots so I had not gotten to bed. I got home and splashed some water on my face and then met him at a hotel. I managed to flick through the script and had a vague idea of what it was about, but I was not properly prepared. Peter is probably the most detailed and organized man you could possibly meet in life so it wasn’t the greatest meeting from my point of view. He was very kind and talked about the film but I left feeling like I hadn’t done enough and felt disappointed. So I thought **** it, I’m just going to put myself on tape, which I did, and sent it to him along with a letter. I was lucky because that seemed to seal the deal.

So what happened to those tapes? Are we going to see them on television? (laughter)

Sturgess: They’re in the film. He just spliced them in. (laughter)

How did you do research your character?

Sturgess: Books and documentaries, which gave me the historical background on the time in which the story took place. I researched the camps and what the people went through. We were also able to track down real Polish survivors who were living in England, and got first-hand information about their experiences.

One guy not only survived the gulag, but also escaped and I was so pleased that I was able to play this person. I went to his home in England and met his wife and son, who is in his 40s. It was an eye-opening experience to sit in a room with someone who wasn’t particularly strong looking or tough, but just a regular guy with incredible determination. It made it very real because he was right there in front of me and it brought home the realization that it didn’t happen that long ago and was a pretty recent tragedy.

Was there one particular aspect of this man that you carried with you throughout the filming?

Sturgess: His sense of humor and he still had a lot of his humanity in tact. He had a real belly laugh when he recalled the story where they used to huddle around one blanket and someone would pump out a fart. He thought that was hilarious. He reminisced that he was just a boy but would pull clothes off dead prisoners who he knew just to keep warm, or stealing the clothing of people who were half dead because he knew they had no chance of surviving and he wanted first dibs. It must be a hard thing to know you’ve done those things and to go to bed with those memories every night.

Knowing the historic facts and that the script is based on actual events, did you feel any conflict when Peter infused the story with fictionalized events?

Sturgess: Peter guided us through the different scenarios and we had total faith in his direction. I personally thought that I captured what Peter wanted for my character – a real man, not a hero or a survival expert, but a man who was forced into this particular situation.

Did you get much of what you needed for your character from the script?

Sturgess: The script on paper was quite a bizarre read because it didn’t read like an average Hollywood movie. We all realized what Peter was trying to do by stripping everything down, even emotionally, from an acting perspective. There were no real emotional scenes. Even the scene where Colin Farrell’s character and my character say goodbye at the border and he hands his knife over to me, there’s no hugging, as people of that generation didn’t do much hugging. Peter was very cautious about when to turn on the emotional tap because he felt the more you hold it in, the more powerful it becomes.

Peter said you spent a lot of time as a group. Did you take something special away from that experience?

Sturgess: For me, it was a life experience – it wasn’t just about making the film. We were like a traveling circus, the cast, the make-up team, the costume people, the lighting guys, the camera and boom operators, and we all had our own personal journey. Bonds were formed and you’re spending time with such interesting, amazing people. Ed Harris (co-stars as Mr. Smith) is an acting hero of mine so it was a big deal. It wasn’t just about being in a film with him where you might have a couple of scenes, but actually being with him for the entire shoot and really getting to know him on different levels. When we wrapped in India with all those kids around us it was really quite powerful and emotional.

Where did you get your acting training?

Sturgess: I didn’t train. I went to the University of Salford in Manchester, but it wasn’t an acting course. It was sort of a course for people who didn’t know what they wanted to do with their lives. It was called Media Performance and it was a bit of everything including theatre production and how to set up a small touring theatre company. It was so amazing and exactly what I needed at that time.

After this kind of awesome experience, how will you choose future scripts?

Sturgess: I’ve been giving that a lot of thought. After “The Way Back” everything seemed a bit flat. I asked myself how do I top that experience so I did spend a bit of time figuring out what to do and what would make me feel excited. Then a project came along in the form of this bizarre, fantasy story about gravity called “Upside Down.” It was completely opposite of “The Way Back,” but equally as creative and hopefully as beautiful. I hope people respond to it because I feel they crave something new, not regurgitated films, and I think this is a very unique cinematic experience.