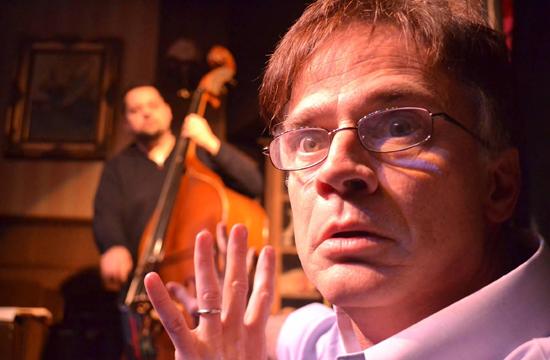 A man walks on to an empty stage. He is neither young nor old; he is casually dressed and wears no makeup. But he walks with a noticeable limp, grimaces as the very elderly sometimes do. And then he speaks. The program says that this first of the characters in “Five Uneasy Pieces” is called “Aunt Ruth” so we may be expecting her to sound like a quaint old granny. But Aunt Ruth’s first words are “Why would anyone tattoo their ****?”

Todd Waring, the actor and writer of this solo show, created his characters in a workshop with actor Jeffrey Tambor at the Santa Monica Playhouse. His “Aunt Ruth” is an aged woman who minces no words as she rambles on about her love life and those of her relatives. It’s a remarkable performance – if one closes one’s eyes, this old woman will seem to appear.

Waring gives amazing renditions of several other characters, each in a sketch of five to ten minute’s duration. In “My Mate Roger,” an Australian art teacher attempts to teach his class but can’t get through it without a bottle of beer and a few anecdotes that don’t take him or the class anywhere. “Cyril” is an aging British actor who is babysitting a toddler while he smokes, drinks, and recalls a painful love. “Boney” is a gangsta whose love life is a bit unorthodox for someone of his lifestyle.

In “Start Prayin,” an officer in Iraq is grounded by his own emotions during combat. And in a sixth “bonus” sketch “Mr. French,” a French singer tries to make like Jacques Brel but his bad singing and playing get in the way.

Most of these pieces are indeed “uneasy.” Each character is trapped in his or her own world and the self-absorbedness sometimes leads to tragic consequences; it also provokes audience laughter. “Mr. French” is all laughs because it’s easy to chuckle at deluded no-talent performers (but even that is a bit sad when you think about it).

In an interview with the Mirror, Waring said that he developed his characters not from real-life models but from his imagination. “I did have an Aunt Ruth and she did have a wart on her tongue and eat apple seeds but it stops about there.” He credited Tambor’s workshop for helping him realize the creations. “I literally would not have done the show without him. He pushes the students – it’s not just about scene work.”

Each character has a particular accent, from the art teacher’s Aussie twang (he pronounces “art” as “a’t”) to the bad singer’s nonsense French. Waring noted that he likes to push the accents to an extreme “because it’s fun – and it helps to create the character.”

In “Mr. French” Waring has the assistance of two real musicians – Lyman Medeiros and Steve Pandis, who also alternate playing the upright bass between scenes. Waring admitted that he does not play the guitar or harmonica or sing – or speak French.

“That piece is all improv – that is, I work from a framework but I improvise from there. It’s different every night. It’s the closest I get to jazz.” And while he does have respect for Jacques Brel, it was irresistible for him to spoof the highly emotional performances of some French singers, not to mention a bit of James Brown.

As for the shocking opening line, it’s the only line in the show that’s for real. “I heard it in a bar,” Waring said. “I was wondering how I could use it.”