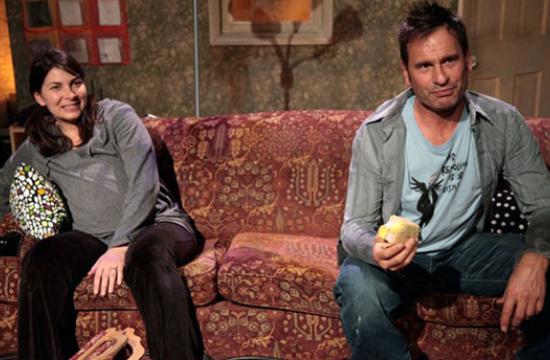 The American premiere of “Me, As A Penguin,” on stage at the Lost Studio, is a quirky play by English playwright Tom Wells and in the interest of supporting and encouraging new writing talent, as well as the producers and directors who put up their work, the production gets “A” for effort.

Following his graduation from Oxford University in 2009, Wells enrolled in a workshop called “So You Want To Be a Playwright.” This play came out of that experience and was subsequently produced in London.

Directed by John Pleshette, the action takes place in the living room of a young couple played by Mina Badie who, as the pregnant Liz, conveys the challenges of sitting, standing, and eating. Her husband Mark, appropriately played by James Donovan, and the gay, depressed cousin Stitch, wonderfully played by Brendan Hunt, rounds out the cast in the first act.

Someone’s occupying the loo (English for bathroom) and Stitch won’t allow anyone to use it. We are led to believe that it’s the young nephew who fell into the pool at the penguin aquarium and is doing a soak in the tub. From time to time Stitch goes into the loo and we hear strange sounds, but no one can get a straight answer from him. In between times, the very nervous Stitch knits (hence the name) avoiding the subject the best he can. Just who is in the bathtub? This is turning into a mystery.

There is a lot of banter between the characters. Dave wants Stitch to move out and Liz is tired of being pregnant and is pretty much cranky throughout the play. She wants a new couch, which her husband stubbornly resists. There were perhaps other dimensions of Liz’s character that might have been worth exploring with a little directorial help. In the meantime, at some point Stitch tries to commit suicide by overdosing on kelp.

Although the material is somewhat talky and overwritten, Wells has a good ear for comic dialogue, constructing some funny lines such as Liz saying, “I don’t like sex really. I’d rather have a good yogurt.” The characters of Dave and Stitch are more developed and have one poignant, but still funny confessional scene together in which Dave reminisces about a showgirl with whom he was in love but “caught her shagging an arsonist.” He muses, “You take the worst of your life and turn it around and laugh at it. No one ever died from a joke.”

An amusing Johnny Giacalone shows up in the second act dressed as a penguin. He’s an employee at the aquarium and we eventually learn that the mystery being in the bathtub is not the young nephew but a kidnapped resident of the aquarium that fits into a small lunch box. Stitch has been busted and the romp continues.

Set design by the director, lighting by Phil Galler, costumes by Esther Rydell, and sound by Joseph “Sloe” Slawinkski, all support the play technically. It should be noted that Craig Robert Young alternates with Donovan in the role of Mark.

Overall, “Me, As A Penguin” is an amusing piece of writing in need of some editing. Also, sometimes there were long pauses between cues, which in a comedy can be deadly. Perhaps it was opening night jitters and the actors are now more secure with their lines and have picked up the pacing.

All this said, this is an entertaining evening of theatre.

(Between First and Second street)

Run: Friday though Sunday until March 6