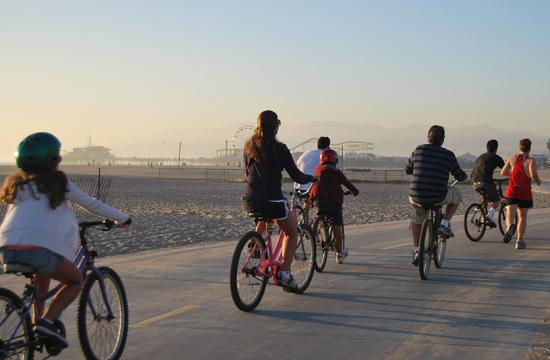 Santa Monica has had a high incidence of bike and pedestrian accidents for years. Until recently, little had been done to improve the situation. Now, the Santa Monica’s Recreation and Parks Commission has begun developing solutions to stem the tide of these types of accidents. On Feb. 16, the Recreation and Parks Commission’s Bicycle Committee held another town hall meeting at the Ken Edwards Center, which focused on bicycle and pedestrian safety issues and solutions.

Mihai Peteu presented some statistics that he obtained from the Santa Monica Police Department from Feb. 2006 through Feb. 2011. In total there were 167 hit and runs (this includes bikers and pedestrians) in the city during the five year period. Thirty-eight of them were misdemeanors and 127 were felonies. There were 962 collisions and eight fatalities. The police record these incidents when they are reported or people complain.

Those in attendance had the opportunity to discuss solutions to make the beach bike path safer. The City Transportation Manager, Lucy Dyke explained that the path is run by L.A. County and that state traffic laws apply. “Right now, the City is looking to put up signs in conflict areas” between pedestrians and bikers. The problems areas are where pedestrians cross the bike path, where there are a variety of speeds for various modes of transportation including bikes, skate boards and rollerblades. “A design should be out by the end of the fiscal year, ” Dyke said.

Recreation and Parks Commission Chair Phil Brock called for temporary signage to be put into place to clarify at key intersections where pedestrians and bikers should be. Other suggestions made by community members included people gaining a clearer understanding of the rules for the paths, putting in a third lane for skate boarders, rollerbladers, and segway users, and having beach ambassadors to help make things safer.

In general, the community felt the best way to improve safety for bikers, pedestrians, and motorists was to have better education for all. The community also supported allowing bike access at the new Palisades Garden Walk Park that is currently being designed for Santa Monica’s Civic Center area.

Brock noted that “if we make if safer, more people will ride” bikes and this would create a healthier community.

Dyke also gave an update on the progress of the Santa Monica Bicycle Action Plan, of which input from the community is being used to synthesize a draft. When completed, the plan elements will include the bicycling goals and policies specified in the City’s Land Use and Circulation Element, specifics on existing and future bicycle commuters, existing and proposed bikeways, existing and proposed bike parking facilities, connections to other types of transit, bike programs, priorities, and expenditure and financial needs. The City’s commissions and boards will then review the draft before the Santa Monica City Council adopts the plan in July. There is an aggressive timeline for the plan so the City can meet the criteria of having a master plan in place to compete for grant funding.

Brock stated that the next meeting will be in three weeks and will focus on bike sharing programs in the United States.