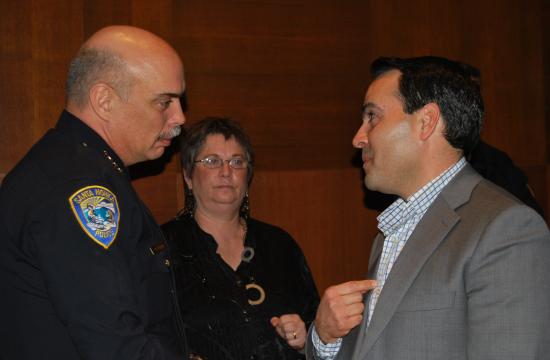 “As always, I fully accept the responsibility for the actions of the entire City staff, including members of our police department,” Gould said in a report before the city council at its Feb. 22 meeting.

Gould’s report comes in the wake of an independent review of the Santa Monica Police Department’s investigation into Santa Monica-Malibu School District Board member Oscar de la Torre, who is also the executive director of the Pico Youth and Family Center.

In December 2010, Gould called on the LA County Office of Independent Review (OIR) to evaluate SMPD’s investigation following considerable media attention and public concern. The OIR found that although the police department was correct to investigate de la Torre for child endangerment in regard to his involvement in breaking up a March 16, 2010 fight between two 17-year-olds, and that the department was correct for bringing that case to the district attorney, the manner in which the investigation itself was carried out did not comply with the “just the facts” orientation of common investigation practices. The report cited failures in witness interviewing techniques, witness follow-up, and report writing conducted by the police department.

“This investigation has been very hard on me. The consequences are severe,” de la Torre said before the council. “But the intent behind the investigation was malicious: it was to ruin my career. First to put me in jail, to make me a felon, to force me to defend myself and leave me bankrupt, and in the end, to defame my character and the character of my organization.”

Beyond the investigation, the OIR took issue with the police department’s report, which it described as “an unusual mixture of fact and advocacy.” To the OIR group, it could not be interpreted as “merely a dispassionate rendering of the facts… The report appears to advocate a position, which may not be the best reporting practice.”

“This matter upsets me,” Gould bluntly declared at the meeting. “After careful review of the report, I regret that although our police department was correct to investigate the incident, the way it was handled unfortunately casts a shadow over the investigation,” he later added. He also said that the whole incident “has the potential to create the appearance of bias and thus put the effectiveness of the police investigations, and public’s confidence in them, at risk.”

Although he is shouldering the weight of responsibility, Gould refused to give in to calls from the community to hold a public inquiry into the detective in charge of the investigation, Sgt. Dave Thomas. “That cannot happen,” Gould said, adding that Santa Monica’s city council/city manager form of government (as set forth in the City’s charter), requires that all personnel matters be handled administratively and not by the council. Additionally, state and local civil service laws, including the police officer’s bill of rights, place limitations on, and set clear procedures for, how personnel actions are handled. Conducting an inquiry in a public forum into an employee’s conduct could run afoul of constitutional rights, Gould said.

Mayor Pro Tem Gleam Davis also defended the council’s inability to exercise some additional oversight by outlining how that type of power could also be used. “If we can review the police department, then we can control the police department, and I don’t think anyone wants a situation where the police becomes a political arm of the city council,” she said. “That’s why it is very important that we respect our city manager form of government and allow this matter to be handled internally within the procedures we have legally set forth.”

Gould reiterated his and Chief of Police Timothy Jackman’s commitment to implement the recommendations of the OIR, which were to develop a detective’s manual; implement more training on techniques for witness interviews; develop a report-writing manual, training, and establish standard report format, even for unusual cases; consider witness bias and document it in reports; emphasize caution in providing counseling and advice when conducting interviews of minors and parents; and implement a more robust review process.

Furthermore, Gould promised a progress report on the implementation of the OIR recommendations within 90 days. He also called on the police department to conduct an internal review of this matter and to determine what additional actions, if any, are called for.

“I want to acknowledge the work of the city manager, because I know this is not an easy task to hold employees accountable and to make sure we work for an honest and transparent government,” de la Torre said during public comment at the council meeting.

Despite Gould’s largely praised actions, some were not satisfied that de la Torre has been given an official apology, despite calls for one. “The [OIR] offers seven recommendations, urging training and better guidance, but it seems to me that it stopped short. I believe Mr. de la Torre is owed a public apology,” said Tricia Crane, a special education activist, who spoke before the council.

“It is very rare that I find that being a council member constrains my ability to express what I think and feel,” said Council member Kevin McKeown. “This is one of those rare situations, because of the legal situation we sit in here. There are particular processes that have to be followed through, individual rights to be protected, and I think we are all trying very hard to respect that and at the same time indicate how deeply concerned we are and have been about this matter.”