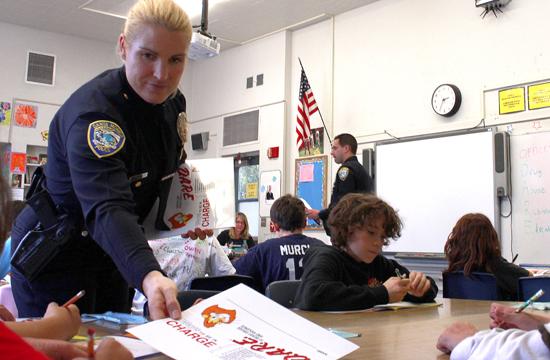 Over the next 10 weeks, 123 fifth grade students at Grant Elementary are participating in a pilot version of the D.A.R.E program, famed for its nationwide campaign to teach kids about the dangers of drug use.

Until now, Santa Monica hsnever implemented the program, which was spearheaded out of Los Angeles in 1983 and has since risen to prominence in the U.S. and 43 other countries world-wide. Even though two-thirds of the nation’s school districts have adopted D.A.R.E. (Drug Abuse Resistance Education), the students at Grant Elementary represent the city’s first experiment with the curriculum.

Although the goal is still to prevent drug use, the program being taught at Grant Elementary is an updated curriculum. Whereas the older version of D.A.R.E, was criticized for its scare tactics and questionable effectiveness, the new D.A.R.E. uses fact-based, interactive teaching to help kids learn smart tactics for decision making on topics including tobacco, alcohol, gang activity, violence, and even peer pressure.

“Kids are smart these days, so it’s more about teaching them responsible choices,” said Police Activities League (PAL) Officer Jennifer Rodriguez, who along with fellow PAL Officer Austin Brown, will conduct the lessons at Grant Elementary.

“We know that it is unrealistic” to expect modern children to be able to simply say no when confronted with tough decisions, said Rodriguez, adding that the goal of D.A.R.E. is to teach children how to say no without deflecting, and to mitigate peer pressure. “Hopefully we can delay that first decision until they are older, responsible adults.”

Officers Rodriguez and Brown attended an intensive 80-hour, two-week D.A.R.E. training program this summer in Beverly Hills. “There is a real process to becoming a D.A.R.E. officer. It just doesn’t happen overnight,” said Scott Gilliam, director of training at D.A.R.E., who has been with the program since its inception. “When they come out of there, they have so much knowledge.”

Gilliam said requirements to become an officer are intensive too, including at least two years of police work prior to entry. He’s seen the program change over the years, and met hundreds of D.A.R.E. trained officers, but Gilliam praised Brown and Rodriguez after seeing them at work with Grant students on Tuesday, Feb. 8. “They don’t know how good they are.”

After returning from the training this summer, the two officers reported back to their superiors, including Santa Monica Police Chief Timothy Jackman, who wanted to know if the updated curriculum would be an effective program. After getting their superiors on board, they then approached the school district. Grant Elementary was chosen.

“What I look for when a program like D.A.R.E. comes around is that I don’t want one that only preaches,” said Grant Principal Alan Friedenberg. “I’m under no pretenses to believe that any program is going to completely stop how kids behave… But there are good programs out there that bring up issues without mandating that something be done. If we bring up issues and options, and teach them that they have choices but those choices have consequences, maybe they will pause a little bit more if they are informed.”

Friedenberg said his teachers enthusiastically jumped on board, even though the classes take 45 minutes per week of valuable time with to their students.

When the 10 weeks are over, the program’s effectiveness will be evaluated, although no one seemed to know how that will be measured. Should it be a resounding success, it could expand into other schools.

“It’s sort of exciting to see where it goes because this program has not been tried,” said Friedenberg. “No one knows where it will go, so the kids will have more imput in this process. I sort of like that. We get to be on the ground level of something potentially great.”