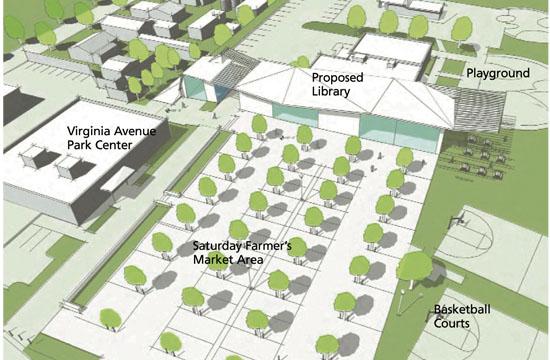 The light at the end of the tunnel is finally visible for residents of the Pico neighborhood, as the Santa Monica City Council approved on Feb. 22 a proposed design of the much-anticipated Pico Branch Library project.

To be incorporated into the Virginia Avenue Park, the latest addition to the City of Santa Monica’s library system is almost 20 years overdue but appears to have a number of people – both residents and community leaders alike – excited about the project’s anticipated arrival into a part of town often overlooked.

Originally part of the neighborhood’s 1983 community plan, the new Pico Branch Library’s single-floor structure was designed by Koning Eizenberg Architects in February 2010 and was refined through a series of workshops and public meetings.

“We are happy that finally Pico neighborhood gets a library,” resident Crystal Anderson stated. “It’s been several decades of asking for it. All of the other neighborhoods already have a library. If this project gets stopped, it’s again the Pico neighborhood who loses out.”

Currently, the closest libraries for Pico neighborhood residents are the Ocean Park or Fairview branches. Council member Kevin McKeown acknowledged the patience demonstrated by residents of the Pico neighborhood in awaiting the arrival of its own library.

“Our Pico neighborhood has waited its turn. It’s exciting to be here on the council in the moment in history when we finally get to move this forward,” he said in response to Anderson’s statement. “(The library is) meant also to attract neighborhood youth to mix education with their recreation by having a library right there in the park. It’s going to be a new and key resource in our lifelong learning community.”

As part of the new library’s design and construction, certain aspects of Virginia Avenue Park’s surrounding area would be preserved, including green park space, recreational programs, and a farmers market. Additionally, the new library branch includes plans for a detached community room and a new seating area in the park; the complete design schematic is anticipated to be in front of council for review this fall.

The only hindrance to the new Pico Branch Library, which would be the fifth branch in the City’s public library system, would be the lack of funding should redevelopment agencies (RDA) cease in California as proposed by Gov. Jerry Brown’s cuts to stabilize the state’s budget.

According to the staff report for the concept design of the Pico Branch Library, the Council allocated $12.8 million of RDA funds to the project. Council members Bobby Shriver and Bob Holbrook questioned what would happen to projects such as the Pico Branch Library should the state legislature approve the proposal to eliminate RDAs, which municipalities across California rely upon to move forward with major local projects.

“A great number of projects that we have discussed and planned for many years in Santa Monica will not be built, including this one,” City Manager Rod Gould stated in response, as if to provide the one gray cloud over the Pico neighborhood in light of the council’s promising decision. “We are moving forward with the design of a number of projects on the assumption that redevelopment will still be in place and we’ll be able to make good on our commitments.”