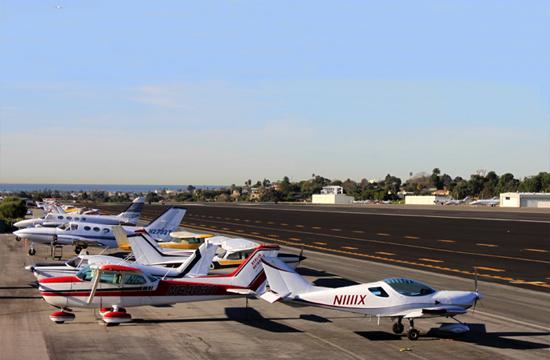 Santa Monica Airport may play a completely different role to the Westside region by 2015. Or it may not, depending on how the results of one consulting firm’s study is interpreted, analyzed, and executed over the course of three phases between now and June 2012.

The Santa Monica City Council authorized the city manager’s office to negotiate and execute a professional services contract for $79,750 with HR&A Advisors, Inc., “to analyze the general economic and fiscal impacts of the current operation and activity at Santa Monica Airport (SMO)” at its meeting on Feb. 22.

“HR&A Advisors was identified to analyze the general economic and fiscal impacts of the current operation of SMO because of its extensive experience providing economic and fiscal analysis of large and complex development projects, as well as other city planning initiatives and policies,” SMO Director Robert D. Trimborn stated in his staff report to the council. “The firm’s body of work includes the regional and local economic impacts analysis of alternatives to redevelop Los Angeles International Airport.”

The council’s decision on Feb. 22 was made in light of a staff direction made in December 2010 to undertake “a community visioning process for Santa Monica Airport to determine a wide range of alternative scenarios for the airport post-2015.”

At the Dec. 14, 2010 meeting, council members authorized City Manager Rod Gould “to negotiate and execute professional services agreements with The RAND Corporation and PointC to formulate and manage an extensive community process regarding the full range of possibilities for the future of the Airport.”

The RAND Corporation was hired to perform “best practices” research to determine the ideal usage of SMO’s property and its adjacent lands; the Council approved at its Dec. 14 meeting agreements for The RAND Corporation and PointC of up to $145,000 and $81,500, respectively.

In light of the December staff directive, Gould came back to the council on Feb. 22 requesting it consider adding an economic and fiscal impact analysis of how SMO directly affects the local and regional economy.

“We’re suggesting tonight you allow us to engage the firm of HR&A to do the economic and fiscal analysis,” Gould told the council. “They’re uniquely positioned to do the work. They did work for LAX, O’Hare, as well as different scenarios for the San Diego … Airport. I am recommending that we add HR&A to our resources to complete this overall visioning process.”

Gould added the next six to seven months could be crucial in determining the available options for growth, sustainability, and future progress at SMO.

“We would use the period between now and September of this year for the consultant to do a lot of their work. The RAND Corporation would begin assessing state-of-the-art alternatives to general aviation, look at different possible land uses on the non-aviation part of the airport, and begin to develop the research and analysis around some of those options,” Gould stated. “HR&A, if you approve the contract, would conduct the economic impact study of what the airport means and does in Santa Monica and in the sub-region.”

As the council unanimously supported the hiring of HR&A to look into SMO’s economic impact to the City of Santa Monica and the region as a whole, one resident who attended the Feb. 22 meeting suggested the approved action might be superfluous and inefficient.

“I am not speaking out against this, but I just don’t understand why The RAND Corporation couldn’t have undertaken this aspect of economic development as well as the best practices research they are doing, and why we need someone different,” resident Jerry Rubin said during public comment. “I also hope that the financial aspects of this could include the financial detriment to the community because of health concerns and environmental concerns.”

However, Council member Kevin McKeown stated HR&A’s research would yield important information about how to best move forward with SMO post-2015, which is an important year because it is when an agreement between the City and the federal government regarding airport operations and current noise restrictions is set to expire.

“As we move toward 2015, and our hopes of more sustainable use for the airport plan, I think that this study will provide invaluable economic information. The timeline on this is aggressive, but I think it’s achievable. I say go for it,” McKeown said.

According to the staff report prepared by Trimborn, there are three phases to the SMO Visioning Process.

The first phase, which will include the works of HR&A, RAND, and PointC, is expected to be complete by September 2011 and will “study and research of possible scenarios for the Airport while gaining information as to the impact and benefits of these options for the community, their work, and quality of life.”

Public workshops are the focus of Phase 2, which is expected to run from October 2011 through January 2012.

Finally, the ccouncil will deliberate all the information gathered by HR&A, RAND, PointC, and the public between February and June 2012, which is the third and final phase.

HR&A, a national economic development, real estate, and public policy consulting firm, was selected at the discretion of the city manager’s office, which as the “authority to identify firms … uniquely qualified to assist the City with the … task of providing meaningful analysis on the airport and its relationship to the community.”

The firm has been working with the City for more than 20 years now, regularly analyzing key issues in “urban policy, housing policy, land use policy, fiscal, financial feasibility and other issues.”

SMO, which was not originally built to deal with jet aircrafts, has been operated by the City since 1926, with a reprieve by the federal government during World War II. Due to litigation resulting from the City’s attempt to limit the airport’s usage in the early 1980s, a compromise was reached in 1984 and was stipulated to remain in place until 2015.

The Council’s decision to offer a professional services contract to HR&A was made almost exactly one month after a Jan. 21 denial by the U.S. Court of Appeals for the District of Columbia of the City’s appeal of a 2009 Federal Aviation Administration (FAA) decision against its ban of Category C and D jet use at SMO. In March 2008, the council approved the to-be-struck down jet ban for safety reasons, claiming SMO had no safeguards or buffer zones to prevent a jet overrunning the runway and possibly crash into nearby homes.

Council member Pam O’Connor was not present at the Feb. 22 meeting.