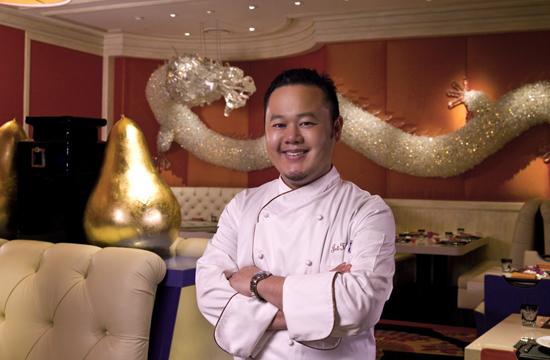 Jet Tila is the Executive Chef of the beautiful Wazuzu restaurant at the Encore, Las Vegas, the signature resort in the Wynn collection. He is a rising star and expert in Pan-Asian cuisine. The Santa Monica Mirror recently sat down with this young, successful chef for an exclusive interview.

Mirror: Wazuzu is the only restaurant of its kind. What is the genesis?

Tila: Two years ago, Steve Wynn (owner of Wynn and Wynn Encore luxury resorts and casinos) decided he wanted a Pan-Asian restaurant and brought in eight chefs from around the world who cooked tastings. It was “Top Chef,” but for real. We all cooked giant meals for the big bosses and then were interviewed.

I was probably the lowest bidder, which is why I got my job here (laughs).

Mirror: How often to you actually cook?

Tila: There’s a point in your career where you stop cooking. I have three chefs under me and I teach them how to cook my food, and they in turn teach our 20 cooks. I do cook when super-important people come in like Steve Wynn. But in reality the Executive Chef title just means that you are basically the number one manager and in my case, I run this restaurant front and back.

Mirror: How did you come up with the name for your restaurant and does that dazzling, crystal dragon on the wall have a story?

Tila: There is a relief sculpture in China of nine dragons and Wazuzu is the name of that piece of art. Our three-dimensional crystal dragon is 27-feet long and is made up of 90,000 individual Swarovski crystals at a cost of $1.5 million.

Mirror: You come from a very interesting family. Can you tell us about your background?

Tila: My dad, Pat Tila, is a famous restaurateur and pioneer who created what became Thai Town. In 1972, he founded the Bangkok Market, the nation’s first Thai grocery and import company, and he was the first of the Thais to open restaurants. The Royal Thai Cuisine Restaurant chain is still owned by my family. He also started the Thai Chamber of Commerce. He was fortunate enough to be born with “his birth luck,” as it is called.

So, I saw the Thai community grow around me, exposing me to all their flavors. My family, also being Chinese, allowed me to pick up Thai and Chinese at an early age.

Mirror: Is your dad still alive?

Tila: My dad retired ten years ago and now lives in Thailand. Mom lives in L.A. and wishes that I called her more often, like all moms.

Mirror: Who was the cook in the family when you were growing up and who influenced you the most?

Tila: My grandmother was the cook and my first influence. As soon as I could stand, she taught me how to cook and it became my obligation to cook. She knew at an early age that I was not going to excel scholastically so she figured I had to find a trade. The skill skipped a generation and since my mom was not a great cook, I inherited the cooking responsibility.

Mirror: You went to school in Santa Monica, right?

Tila: I attended St. Monica Catholic High School, which doesn’t mean I finished. I hated school so I would ditch to work fishing boats and was a short-order cook when I wasn’t working at our restaurants during the summer. After I got my GED, I attended Santa Monica College for a few years.

A common thread that a lot of chefs have is that we’re not school kids. We’re misfits who like to party. I also had ADHD (Attention Deficit Hyperactive Disorder) so I found the right profession for me. I taught cooking classes out of my back yard to promote the store and it was a good way to earn beer money.

The Los Angeles Times did a story on my cooking classes, which got the front page of the Food Section.

Mirror: Did anything happen as a result of that feature?

Tila: The feedback was so overwhelming that she basically closed me down and that’s when I knew I had to go to culinary school and take this seriously.

Mirror: Which culinary school did you attend?

Tila: The California School of Culinary Arts in Pasadena, before it became a Cordon Bleu school. It was the last of the intimate, hands-on classes, which I really appreciated. I also eventually attended the California Sushi Academy. Fresh out of school I went to Russ Parsons, who was the food editor and columnist of the L.A. Times, and begged for an internship. I got a three-month internship which turned into three years. I would test recipes and that’s when I started writing.

Mirror: What other projects do you have going?

Tila: My partners and I do the Indian and Thai food lines for the Whole Foods markets, so if you ever eat Thai or Indian food in New York, Boston, or Chicago, you’re eating our food that is sold in the hot bar.

Mirror: Did you create all the recipes?

Tila: We created the recipes and trained the staff who work in a plant in Newburgh, in upstate New York, where the food is manufactured, nitrogen packed, and then shipped all across the country, but primarily the distribution is on the East Coast.

The second thing I’m involved with right now is my Asian line with Schwan’s. Anyone from the Midwest knows about the Schwann’s food truck guy who comes to your house every two weeks to stock your freezer and refrigerator. I did very well in 2010 so this year we’re starting another line with them.

Mirror: With so many projects, how do you divide your time?

Tila: I spend 50 hours a week here in Las Vegas in this lovely restaurant, and on the weekends I usually fly to New York or Boston. If I’m not at the plant, I’m supporting the Whole Food stores.

Mirror: Do you have one dish that you consider your signature dish?

Tila: I built my career on curry and Pad Thai. I believe that Pad Thai is the quintessential Thai dish and nobody makes curry the way I do because the recipe was passed down by my grandmother. Curry should be velvety and a balance of hot, sour, salty, and sweet.

Mirror: Can you explain the two world records you hold?

Tila: A few years ago I did a 500-pound Pad Thai and submitted it to the Guinness Book of World Records but they felt it was a stir-fry and said they already had a record of 900 pounds. I got really mad and decided to do the world’s largest stir-fry, to spite them. So 1,805 pounds of stir-fry later, that became my first world record. I also broke the record for the longest California Roll, which measured 422 feet and took 300 people to roll.

Mirror: Where did you do this?

Tila: I have a friend at the University of Massachusetts-Amherst and it was the only place that was crazy enough to go for it. I’m one of those guys if you tell me I can’t do something, I’m going do it. I’m headstrong and stubborn.

Mirror: Are you married?

Tila: I’m not married but have been dating the same person for quite a while. I’m very fond of my girlfriend and my dog, which is a pit bull. This is a very tough life for a family. It was tough as a child because my father lived this life. If I have children, it will probably be when I slow down around 40. I’m going to give myself four or five years to figure out whether or not I want to have kids. I love kids, but I don’t know if I’ll have the time to raise them.

Mirror: Where would you like to be in the next five years?

Tila: Wow. That’s a great question. I love media and am very savvy. I know the realities. Everyone wants a TV cooking show. Even though I have an agent and a publicist, it’s really about business first and building a solid business foundation. That said, I would also like to write some books, but my ultimate dream is to become the authority on Pan-Asian food in America because I don’t think there’s a spokesperson yet who can competently speak to the broad range of Pan-Asian foods. Yes, it would be fun to do a TV show, but the reality at this point, is I just want to make sure I can pay my bills and live a comfortable life.

Mirror: The food is fabulous, and thank you so much for a fun interview.

Tila: Come back any time.