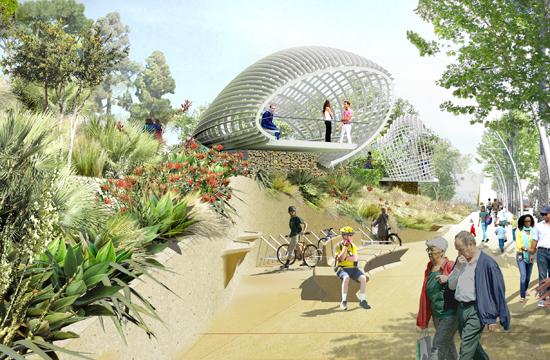 The collaborative community design process for the two new Civic Center parks that were envisioned in the Civic Center Specific Plan drew to a close on Feb. 26 with a final workshop.

One of those parks will be a six-acre park (currently called Palisades Garden Walk) that will be located directly across from City Hall and bounded by Main Street, Ocean Avenue, the I-10 freeway, and the extension of Olympic Drive. This is the former RAND site. The other one-acre park (currently called Town Square) will be located directly in front of City Hall, from the City Hall’s steps down to Main Street and across the street from the six-acre park.

Workshop participants were given the opportunity to comment on the design developed by city consultant James Corner Field Operations. Inspiration for the design came from the community input heard at three prior community workshops, from City commissions and the City Council.

Key places that were part of the design were a town square that included City Hall, a garden hill with garden bays, botanical gardens, and a water bay, a discovery hill with play areas and café space, a gathering hill with seating steps, picnic areas, and a gathering lawn, and a grand hill with overlooks and a public restroom. Also included were water features for the town square, water bay and Ocean Avenue portion of the park.

James Corner noted during his design presentation that plants and trees were incorporated into the design that change throughout the year “to create a park that is different from month to month” to keep people coming back.

Corner also announced artist Inigo Manglano-Ovalle will be creating the public art for the project.

Most of the community members liked the design of the larger park but expressed concerns about its maintenance, liability issues, safety, security, American with Disabilities Act accessibility, making it accessible for children with disabilities, shade from the sun, and its infrastructure. Valerie Griffin, the chair of the Wilshire/Montana Neighborhood Coalition, stated that the “The design is gorgeous! I look forward to spending time at a wonderful park. One of my favorite things about it is that the plantings will show off our subtle seasons. I’d love an annual theatrical event where the audience follows the action of the play throughout the park. Imagine ‘A Midsummer Night’s Dream’ or ‘As You Like It’ performed all over the park!”

Jeff Silberman, a member of the city’s social services commission, thought the parks were “tremendous and that the architects were creative and artistic coupled with sensitivity to the environmental concerns.” They also had “an outstanding vision to put all the voices into a beautiful design that is sustainable and is a beautiful contribution to the city.”

More dissatisfaction was expressed about the town square design which some found to be too rigid, too formal, and not social enough. However, Margaret Bach’s opinion of the town square differed when she stated, “As a Landmarks Commissioner, I have a particular interest in the evolution of the Town Square component of the park plan — and it is definitely moving in the right direction. The plan respects the landmark WPA-era City Hall and is seeking to create a meaningful and flexible public space that is appropriate to its important role in our civic life. As for the park itself, I endorse the basic concept and architecture of the park and its circulation. However, I am concerned that the park is overly designed, with contours and overlooks that create visual and functional barriers for the public. I would endorse a simplification of the plan to create more openness, access and cohesiveness.”

Social Services Commission Vice-Chair Albin Gielicz thought the “entire process was a pleasure to participate in.” He liked the design for Palisades Garden Walk because it was “extremely well thought out and addressed all the public feedback.” He also likes the town square “as it is and doesn’t know if it has to be completely redone.”

Michael Feinstein, a former Santa Monica mayor, thought the town square “should contain some area for city press conferences with a backdrop of City Hall.”

Names for each park were also discussed but a consensus was not reached on a name for either park.

Recreation and Parks Commission Chair Neil Carrey commented after the community input that he was “amazed to see so many concerns addressed” by the design.

Corner responded that all the “issues (expressed by the community and the park commission) will be taken seriously and resolved.” In terms of the comments on the town square design he explained that, “it is very difficult from a design standpoint to make a space that is on the one hand ceremonial, grand, and civic and on the other hand social. There’s a tension between formality and informality.”

The workshop concluded with the City’s Director of Community and Cultural Affairs, Barbara Stinchfield, discussing the next steps for the project. First the design will make the rounds to the City’s various boards and commissions for their review. Then the landmarks commission will review the town square in May. Their decision whether to approve a certificate of appropriateness is necessary because City Hall is a designated historic landmark. The architectural a review board will do review of the furnishings and signage for the project. The coastal commission will also review the project design and in late June the Santa Monica City Council will decide whether to approve the design. If the city council gives their approval, construction documents will be drawn up and construction will start in the spring of 2012.

The design shown at this workshop evolved from three prior community workshops. During workshop one everyone took a self-guided walking tour of each site and provided input by voting on park uses and themes at the stations that were set up at the sites. Workshop number two focused on concept design. Participants had the opportunity to comment on three different concept designs developed by the consultant based upon the input from workshop number one. These concepts were Arroyo Wash – organization, soft geometry, connectivity, forest character zones; Arroyo Ravine- dramatic views and topograph; and Arroyo Dune – program mix, sense of destination, play spaces, high percent of shade. The third workshop focused on schematic design. During this workshop attendees focused on refined details from previous concepts that should be incorporated into the schematic site plan.

Funding for the project will come from city redevelopment money. Karen Ginsberg, the assistant director of the community and cultural affairs department, told the Mirror the $25 million project is moving forward despite concerns that Gov. Jerry Brown has proposed abolishing all the state redevelopment agencies. If approved by the state legislature, Brown’s proposal would mean all of Santa Monica’s redevelopment money would be taken by the state to help close its $25 billion budget gap.