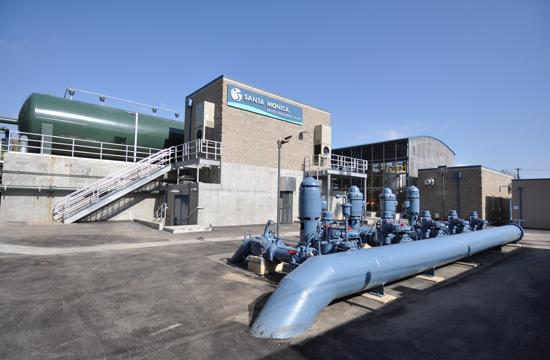 For 14 years, the City of Santa Monica has had to import 85 percent its water from the Metropolitan Water District of Southern California because the City’s water supply became polluted in 1996 with methyl tert-butyl ether (MTBE), a gasoline additive. Now, with the opening of the Santa Monica Water Treatment Plant (SMWTP) the city will only have to import one third of its water supply.

The new plant began operating on Dec. 4, 2010 but its plaque dedication ceremony was not held until Feb. 24. Mayor Richard Bloom told the large crowd “today does mark the full restoration of the city’s groundwater and the reduction of the city’s use of expensive imported water from Northern California and the Colorado River. Given the risks and uncertainty of the California water supply the only reasonable response for Santa Monica is to reduce its use of an imported water supply. We were one of the first victims of the MTBE pollution. We will now set the standard with this facility for MTBE cleanup.”

“This has been a mammoth endeavor, many years in the making,” noted City Manager Rod Gould in his remarks at the ceremony. “It wasn’t until 2006 when the City and the attorneys were able to reach an agreement with all the major oil companies to take responsibility for the MTBE contamination … and its remediation.”

City Administrative Analyst Jamie Malpede told the Mirror that, “The oil companies had underground storage tanks and that (MTBE) leached from their storage tanks” into seven of Santa Monica’s eleven well fields. At that time, MTBE was added to gasoline to reduce the gasoline’s air polluting effects but its use was banned in 2004.

The two Arcadia Wells located the 1228 South Bundy Drive SMWTP were shallower than the Charnock Well Field and so the oil companies have already cleaned the MTBE out of them. The water from the Charnock Well Field is filtered through granular activated carbon filters to remove the MTBE and is then mixed with the water from the other wells after it arrives at the Santa Monica plant.

The new plant treats groundwater that comes from the city’s Charnock, Olympic, and Arcadia Well Fields. All the well water is then filtered through greens and cartridge filters to remove iron, manganese, and sediment. Reverse osmosis filtration then softens the water further by removing the remaining iron and manganese. The next step adjusts the water’s mineral content and pH. Also during this step fluoride is added and the water is disinfected with chloramines. The last step allows the water to be aerated in the 5 million gallon Arcadia reservoir to remove volatile groundwater contaminants. The plant will be processing 8 million gallons per day, which is two-thirds of the city’s daily average water use of 12 million gallons.

Construction of the plant took 18 months and cost $60 million, which was funded from the $252 million legal settlement with the oil companies. The settlement money will also help pay for the plant’s annual operating costs. Gil Borboa, the City’s manager of Santa Monica water resources, said “imported water costs keep going up” so using the city’s own water supply helps keep a lid on escalating costs.

City Engineer Lee Swain explained that by building this cutting-edge water treatment plant the city will be in a more “flexible” position in the future to handle any new requirements for maintaining water quality imposed by the California Department of Public Health and the U.S. Environmental Protection Agency.