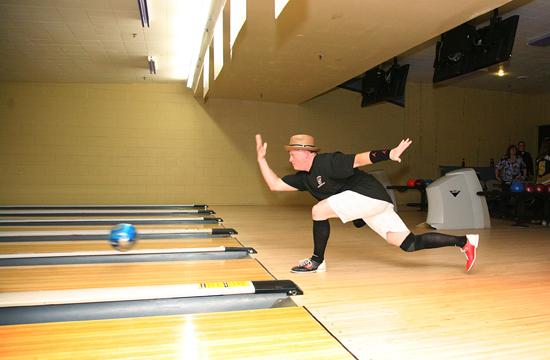 Santa Monica’s communities came out in force Feb. 4 to strike up support for the city’s homeless services at the 15th annual Bowl-A-Thon at the Bay Shore Lanes in Santa Monica.

The annual fundraising event is hosted on the first Friday in February by the Westside Shelter and Hunger Coalition, one of Los Angeles county’s oldest nonprofit organizations working to end homelessness and hunger.

About 500 people from the city’s municipal, business, and nonprofit communities came out to bowl at this year’s seven-hour event, according to event co-chair Lynne Thomas of The Lobster restaurant.

“It’s great to see all these people coming together and supporting this cause year after year, despite this economy,” said former event volunteer Marilyn Beck. “It puts a good feeling in the community that we can still make this happen. Every year we get more teams; it continues to grow.”

“People like to give back to the community knowing it’s going to a good cause. And I think a lot of people really enjoy bowling but don’t admit to it,” said event co-chair Ron Davis of Capital Source Bank.

John Maceri, executive director of the OPPC, noted the event has raised between $18,000 to $20,000 a year for the coalition. Part of the proceeds will help support the westside’s two winter shelter programs for homeless individuals and families. OPPC is one of the coalition’s founding member organizations.

Pledges are still incoming and will be tallied over the next week. “We’re hoping to raise more than a total of $30,000,” said event organizer Donna Gentry.

A customary match between the city’s police chief and fire chief is the event’s crowd-pleasing tradition. Its origins go back to 1917, according to Jim Harris, pier historian and community venue liaison for the Santa Monica Pier and Restoration Corp.

“In 1917 a bowling alley opened on the Santa Monica pier. On opening night, Mayor [Samuel L.] Berkley and Police Chief Ferguson had the opening match. The winner took home the trophy and the loser got a bottle of ketchup. The police chief beat the mayor that year,” he said. The match was revived at the pier’s 2009 centennial celebration, and a match between the police and fire chiefs has since become part of the annual Bowl-A-Thon.

Police Chief Jackman narrowly maintained his winning record by one point, with a final score of 114 to 113. The trophy and ketchup were presented to the chiefs by the pier’s Interim Executive Director Steve Gibson. “It was a hard-fought battle,” said Police Chief Jackman on receiving his second winning trophy. “I’m proud to be carrying the Heinz ketchup bottle,” said Fire Chief Ferguson, who began his post in March 2010, on his first Bowl-A-Thon experience. “I apologize to my firefighters for not representing them.”