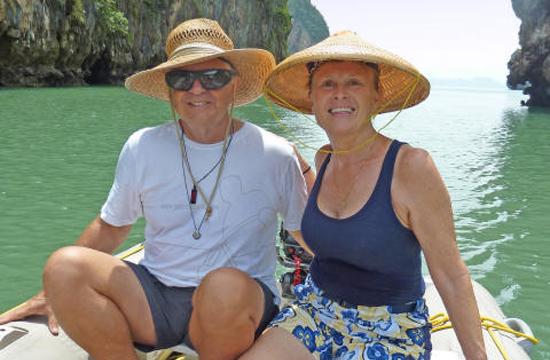 Four Americans taken hostage by Somali pirates off East Africa were shot and killed by their captors. Two of them were members of St. Monica’s church in Santa Monica

“As they responded to the gunfire and began boarding the Quest, U.S. sailors discovered that all four hostages had been shot by their captors,” Fox was heard saying on the NPR program. “Despite immediate steps to provide immediate life-saving care, all four of the American hostages died of their wounds.”

Among the four victims were Jean and Scott Adam. The hijacked boat was identified as the Quest, a boat that the Adams are believed to have periodically docked in Marina del Rey. Their website states that they are members of the Marina del Rey Yacht Club.

“Our hearts are broken,” read a statement from family of the Adams on the St. Monica Church website. “Jean and Scott were taken from us in the worst possible way.”

“We too also join the community of Santa Monica in mourning and express our deepest condolences for their loss,” said Omar Jamal, first U.N. secretary at the Somali mission, in a phone call to the Santa Monica Mirror.

On Feb. 18, Somali pirates hijacked the yacht carrying four U.S. citizens off the coast of Somalia in the Indian Ocean. Phyllis Mackay and Robert A. Riggle, from Seattle, were also on board with the Adams, who were sailing on their 58-foot yacht headed to the tiny nation of Djibouti to refuel, the New York Times reported. The hijackers struck several hundred miles off the coast of Oman, the New York Times reported. Mackay and Riggle were also killed.

The Adams had been sailing around the world distributing Bibles for the last seven years. According to the Adams’ website used to chronicle their journey, they have been distributing Bibles to schools, parishes, and churches in areas including Alaska, New Zealand, Central America, the Fiji Islands, and French Polynesia.

“Jean and Scott put their faith into practice by travelling the world to give the gift of the Scriptures, to people seeking hope,” St. Monica’s website read. “(They) were killed while doing what they loved, which was sharing the gift of faith.”

Monsignor Lloyd Torgerson of St. Monica’s Catholic Church, spoke with the Mirror prior, to news of their deaths. “They just had this desire to make a difference in the world… Their mission was to deliver Bibles to the far-flung corners of the world.”

Monsignor Torgerson said Jean Adams had been a member of the church’s choir. “Jean and Scott were active members of St. Monica Catholic Community,” read the statement on the church’s website. Torgerson said he last saw the couple around the most recent Christmas when they stopped by St. Monica’s Catholic Church. He said that the masses of this past weekend featured vigil prayer services for the Adams.

Jamal said he has called on the U.S. and other countries to not provoke pirates when hostages are involved. “If you look at the history of those pirates, it is unlikely for them to kill if not provoked,” he said. “It is difficult to think they did this without being provoked – to kill their hostages for whom they are expecting a random.”

Somalia has been home to a flourishing nest of pirates, who have hijacked everything from small sailboats to giant freighters. Since 1991, Somalia has lacked a functioning central government. This lack of societal structure has been attributed as the cause for the ever growing nest of dangerous pirates who tend to seek multimillion dollar ransoms from the hijackings. It is believed that the various pirate groups have a total holding of 29 ships and roughly 660 hostages before the latest seizures, the Associated Press reported.

“This is the condition of Somalia when it is left in this condition of rampant piracy,” Jamal said. “This is a clear indication that pirates must be dealt with – that the international community must take the issue of piracy seriously.”

These killing mark the first time U.S. citizens have been killed in the wave of pirate attacks infesting the Indian Ocean and more specifically the Gulf of Aden in recent years.

As of publication time, no designated funerary services were set in Santa Monica, but St. Monica’s Church will continue to honor the Adams with prayers at each of the daily Masses, at 6:30 a.m., 8 a.m., and 12:10 p.m.

At the family’s request, anyone who would like to send cards may do so in care of St. Monica Catholic Community, 725 California Avenue, Santa Monica, CA, 90403. Further, if anyone wishes to make a donation on behalf of Jean and Scott Adam, the family has asked that memorial gifts be given for the St. Monica Catholic Church Music Program.