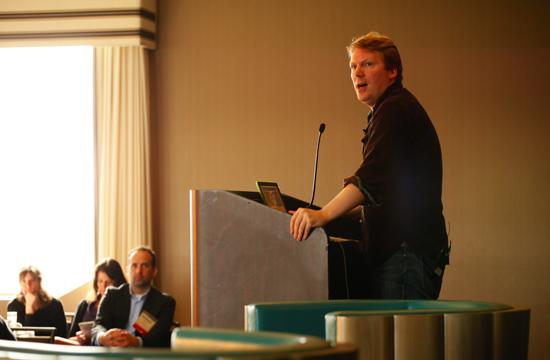 Sustainable practices and products have come to be viewed by many as a way to not only help preserve the environment but also as a way for individuals, businesses, and government to save money. On Feb. 16, Cameron Sinclair, the co-founder of Architecture for Humanity, gave a keynote address at the Sustainable Industries Economic Forum that described how his organization is focusing on “the challenges and opportunities in rethinking design for accelerating social and environmental enterprise in today’s dynamic economy.”

Sinclair founded his charitable organization 12 years ago along with Kate Stohr according to the biographical notes on Sinclair from the forum, to seek “architectural solutions to humanitarian crisis and bring professional design services to communities in need.” They have 72 chapters worldwide and are working on projects in Haiti, the United States, and 21 other countries. His organization has completed 360 projects worldwide that have helped house 1.5 million people.

The Architecture for Humanity approach includes embedding architects and engineers in the communities they intend to work in for about six months or a year prior to construction so they can better understand the needs of the community. They incorporate “cultural sustainability” through a design process that includes input from the community. Their focus also includes “community led construction” which is facilitated by training and hiring local construction workers. Lastly, Sinclair noted since his organization is “not looking for financial gain” they make their architectural plans available for no charge so “anyone can replicate our work for free.”

In order to effect social and economic change Sinclair’s organization stays involved in a community for an additional six months to five years after completion. They also found that in order to “make an impact” on post disaster construction they can’t build just one house, it must be hundreds. For example after hurricane Katrina, they came in and built 722 homes.

Architecture for Humanity is funded by donations from celebrities, foundations, and by fundraisers. Sinclair stressed that after a disaster occurs “it doesn’t matter how good you are but how quick” you can act.

Sinclair views his organization as a resource for “research and development for the humanity in the developing world.” He noted that there are 4 billion people classified “as the global emerging middle class” and that there are 1.7 million people who live in refugee camps, which is potentially a huge customer base.

Also part of the forum was the announcement of the grand prizewinner for the BBMA Collective Prize. The prize consists of $100,000 of in-kind services from BBMG’s consumer insights and brand innovation services. The prize went to “Get Around” who was chosen from a field of eight finalists by the readers of Sustainable Industries’ publications.

Get Around representative, Jessica Scorpio, said their company hopes to “transform the way people see and use cars with a new concept called peer to peer car-sharing” which is already available in San Francisco and San Diego.

Brian Back and Sustainable Industries’ other co-founder, Nik Blosser, launched their company in 2003 as a media company to provide news, tools, and analysis on environmental and social components of regional economics.