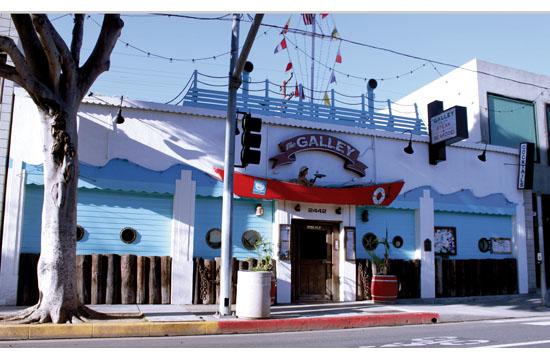 “Captain Ron” Schur, owner of The Galley, believed to be Santa Monica’s oldest restaurant, likes to tell the story of how he came to be the owner. It was all because of the salad dressing.

The Galley was founded in 1934 and Ralph Stephan ran it for 54 years.

“I was a customer at The Galley for a long time,” said Schur. “I was in the fast-food business… and I was looking to graduate to the restaurant business.”

Schur kept returning, eating the salad, and asking about its contents, until Millie grew impatient and proclaimed loudly that Schur should buy the place (using a four-letter adjective). Embarrassed, Schur stayed away for some time, but some years later, upon discovering that the restaurant was in disrepair and that the now-elderly owner was in the hospital, he offered to take over The Galley and became the official owner in January 1989.

Schur admits that to this day, he still doesn’t know how the dressing is made. “After I had been owner here a year Millie came up to me, put a bottle of the dressing in my hand and said ‘You’re a nice guy.’ Nicest thing she ever said to me.”

The Galley’s façade, which resembles the side of a ship, is familiar to passers-by. Less familiar is how but “Captain Ron” acquired his nickname. The relates to the poem “Invictus” with its final line: “I am the master of my fate/I am the captain of my soul.” As in the poem, Schur refused to give up when he saw the deteriorating restaurant. He fixed the place up, adding more interior space (it used to seat 60; now it seats 120) and a back patio. The present-day Galley’s interior still has its nautical theme, complete with a captain’s wheel and portholes, as well as bright multi-colored lights strung all over the ceiling, creating an ambience of permanent Christmas, because, as Schur said, Christmas time creates “a feeling of good will toward all.”

Indeed, for those who want a trip back to a time of wood-paneled restaurants, with wooden booths, and traditional steak and seafood fare, The Galley is the ticket. The menu has a few concessions to modern taste such as Caesar Salad and Rosemary Chicken but mostly it consists of meat (top sirloin, T-Bone, lamb chops) and seafood (Australian Lobster Tail, Shrimp Scampi). All the seafood comes from Santa Monica Seafood and “Captain Ron” makes sure to have the freshest ingredients.

Those seeking a Valentine’s repast might want to order the following, which “Captain Ron” ordered for this reviewer: Shrimp Cocktail, featuring two enormous shrimp with a tangy sauce, Seafood Diavolo, with various fresh fish, clams, and jumbo shrimp in a spicy but not too strong tomato cream sauce, served over a choice of pasta, and Chocolate Blackout Cake which was out of this world and great-tasting with a glass of red wine.

Of course, one who wants a light meal can always order one of several salads, presumably with that dressing.