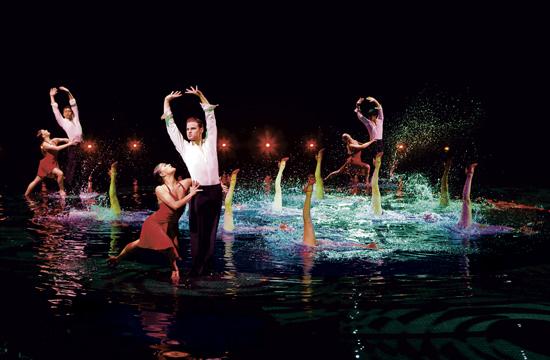 In describing Las Vegas, someone once coined the expression “Man’s monument to poor taste,” and while there is unquestionably the garish component to the city, Las Vegas could easily also be described as one of the entertainment capitals of the world, as the shows there are second to none.

Case in point is the luxurious Wynn Hotel’s production of “Le Rêve,” created by Franco Dragone, founder and artistic director, who assembled a creative team from all points of the globe, who use state-of-the-art technology to create a mind-blowing theatrical experience. The show, performed in the round, is an aquatic spectacle, dazzling to the senses from an opening kiss to the very last dive from the high grid, 80 feet above the over 23-foot deep pool, filled with 1.1 million gallons of filtered water. The stage is a giant circular platform that rises and submerges from deep within the pool according to the sequence being performed. The 90-member talented cast comprised of athletes and entertainers capture the imagination with their outrageous antics, while live music and elaborate special effects immerse the audience into a world of fantasy, adventure, and intrigue.

Amid all the incredible theatrics lies a love story that is interwoven throughout the performance, beginning with a couple dancing. They bid each other good night, the woman lies down on a bed, slowly disappears underwater, and her dream state begins.

Claude Santerre’s theatre design is composed of 60 sound effects, designed by Peter Hylenski. Coupled with the light design by Jules Fisher and Peggy Eisenhauer, which uses 20 miles of underwater lighting cable, powering 450 pool lights. The two teams work together to fill the senses with a kaleidoscope of changing colors and sounds, beautifully supporting the precision water ballet routines, created by Dacha Nedorezova, some of which are reminiscent of the very famous water choreographer, Bugsby Berkeley. Other members of the creative team include choreographers Giuliano Peparini and Maksim Chmerkovskiy, Production Designer Michel Crete, and Claude Renard who designed the marvelous costumes.

Twenty-two acrobats, who are supported by the same cable used to build aircraft, execute eye-popping daring feats of aerial gymnastics, created by Didier Antoine. Performed on multiple grid levels, requiring 14 riggers and 60 harnesses, safety for the performers is paramount.

The majority of the 90 cast members, all of whom must be scuba certified before performing, represent 17 countries and have experience in competitive gymnastics, swimming, or circus backgrounds, including national, world, and Olympic competitions. The music, by Composer and Musical Director Benoit Jutras, spans all genres, from rock to chorale singing, including Carl Orff’s haunting “Carmina Burana.”

“Le Rêve,” French for dream, is a magical, mystical experience that allows you to dream with your eyes wide open and coincidentally is the name of owner Steve Wynn’s Picasso painting that bears the same name.