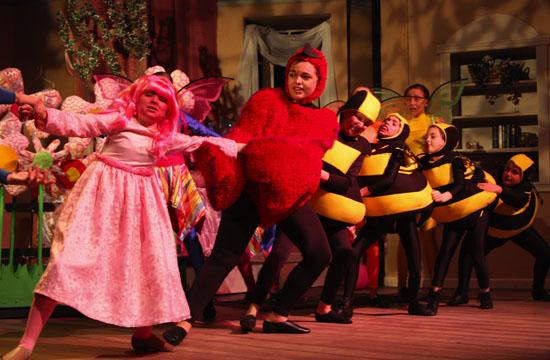 A musical about a young girl’s obsession with the color pink has set box-office records here in Santa Monica. The Morgan-Wixson’s production of “Pinkalicious The Musical” was sold out for every performance a week in advance of its Feb. 5 opening, the largest presale in the history of the local theatre. Two more performances were promptly added and immediately also sold out.

“There’s been nothing like this for a kids’ show-ever,” commented a Morgan-Wixson employee. And on the morning of Feb. 5, the theatre was crammed from top to bottom with kids (mostly little girls) dressed in pink skirts, tops, tutus, slacks, and hoodies, accompanied by parents (mostly mothers) often also dressed with at least a touch of pink.

For those not up on youth culture, “Pinkalicious” is a popular children’s book, published in 2006, written by Victoria and Elizabeth Kann and illustrated by Victoria Kann. (It spawned a sequel called “Purplicious” but that’s a story for another time). The cult following for “Pinkalicious” has yielded dolls, pink-themed birthday parties, and the musical adaptation by the Kanns and John Gregor, which has been staged in New York and Toronto.

The story line is a modern fairy tale with some of the cautionary scariness of traditional Grimm’s tales. Pinkalicious is a girl who loves the color pink, not because anyone has told her it’s appropriate for girls but simply because she just loves it. In fact, her love for pink becomes an obsession and she eats too many pink cupcakes, with the result that she wakes up and finds she’s become pink all over. Her parents take her to “Dr. Wink” whose diagnosis is “pinkititus,” an affliction that might get worse unless Pinkalicious lays off the cupcakes and starts eating “green foods.” In the meantime, younger brother Peter envies his sister because, contrary to cultural norms, he has something of a pink obsession himself. It may in fact run in the family.

The Morgan-Wixson’s production features a cast of actors under the age of 20, most of whom are students in Santa Monica and other Westside schools. The three adult characters, Mr. and Mrs. Pinkerton and Dr. Wink, are played by, respectively, Sergio Christofala, a junior at Star Prep in Culver City; Quinn D’Andrea, a 14-year old Samohi student; and 12-year old Lycee Francais student Chanelle Nibbelink. Their ages come as a surprise considering the maturity of their performances and their singing voices.

But Zoe D’Andrea (age 10) and Grant Venable (age 9) stand out as Pinkalicious and Peter. D‘Andrea sings, dances, and acts up a (pink) storm in the title role and gives what might be a star-making performance. Venable also handles his role with amazing spirit.

The Morgan-Wixson audience loved the show, giving loud ovations to the dance numbers choreographed cleverly by Jonathon Saia, laughing at the jokes, and even giving cast members some advice (“The cupcakes are up there on top of the refrigerator!”)

Director Anne Gesling told the Mirror that the Morgan-Wixson chose to produce “Pinkalicious” almost by accident. They had planned to produce another children’s show but could not obtain the rights. Someone suggested “Pinkalicious” to Gesler who had never heard of it. “We had no idea it would be this phenomenon.”

Gesler attributed the quick sell-out to the buzz about the book itself. “The book is so popular, you just have to say ‘pinkalicious’ and that’s it.”

Pink-clad Jordan Hilton, age seven, said that she thought the musical was “kind of funny” and faithful to the book. Asked about her favorite part of “Pinkilicious,” she said it was when “she eats too many cupcakes and turns pink.”